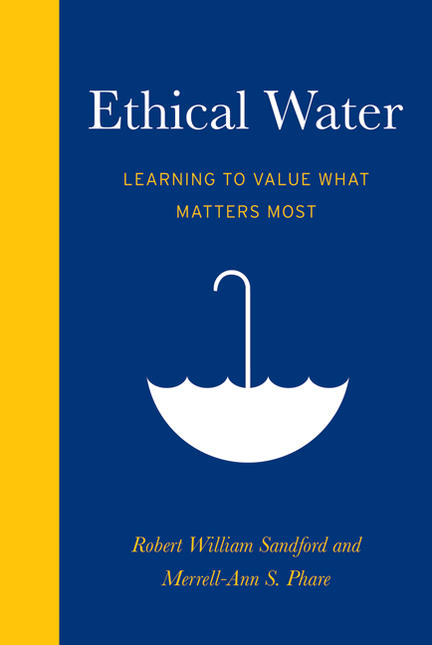 Fresh water is essential to both the ever-expanding human population and the ever-threatened natural landscapes that surround us. And yet, society seems to continually ignore the need for a common-sense approach to—and appreciation of—our freshwater resources and our consumption of this remarkable, life-giving substance that now exceeds its future availability.

This ground-breaking and approachable work, by two of Canada’s most authoritative experts on water issues, redefines our relationship with fresh water and outlines the steps we as a society will have to take if we wish to ensure the sustainability of our water supply for future generations.

Merrell-Ann S. Phare is a member of the Forum for Leadership on Water (FLOW), which published “Changing the Flow: A Blueprint for Federal Action on Freshwater.” She is also a legal advisor to the Assembly of First Nations regarding water matters. Merrell-Ann serves on numerous advisory committees and consultation bodies on behalf of the Centre for Indigenous Environmental Resources (CIER), including the Expert Advisory Committee to the National Round Table on Environment and Economy (NRTEE), the Regulatory Advisory Committee of the Canadian Environmental Assessment Agency and recently finished two three-year terms on the Joint Public Advisory Committee (JPAC) of the NAFTA Commission for Environmental Cooperation. She was a member of the 2005 Lake Winnipeg Implementation Committee and the 2003 Manitoba Task Force on Emissions Trading and the Manitoba Economy. She has been a member of Canada’s delegation to the United Nations’ Commission on Sustainable Development, and represented the Assembly of First Nations on Canada’s delegation to the first meeting of the parties to the Kyoto Protocol. She is also a member of RBC’s Blue Water Advisory Panel, which advises the Royal Bank on water matters and, in particular, distribution of its $50-million Blue Water Fund.

I am grateful that Sandford and Phare are fighting for a better Canada on our behalf. The very fact that Ethical Water takes a principled stance is downright refreshing. Reading it with an open mind will probably make you a better person, and there’s no higher test of the value of a book.—Kyrke Gaudreau, Alternatives Journal

Within the deep blue covers of Ethical Water flow a clear image of why the current Western World's view on how to manage water is profoundly unsustainable, all capped with a sensible, concise prescription for a vital solution.—Lynn Martel, Rocky Mountain Outlook

Ethical Water: Learning to Value What Matters Most

Canadians assume that we will always have plentiful water. But the authors of Ethical Water explain that we need a new approach to water if we are to preserve our way of life. Well thought out and well documented, this text proposes a new Partnership Ethic that takes into account both people and nature, encompassing First Nations values, ecosystem requirements and future sustainability. The author argues that a market-driven approach will not achieve the long-term results needed; strong political leadership will be required at all levels. The Northwest Territories Water Strategy illustrates how this can be done as does the European Union Water Framework Directive. In Canada we are not yet in a crisis situation, but this book proposes that we need to act now.

Other titles by Merrell-Ann Phare