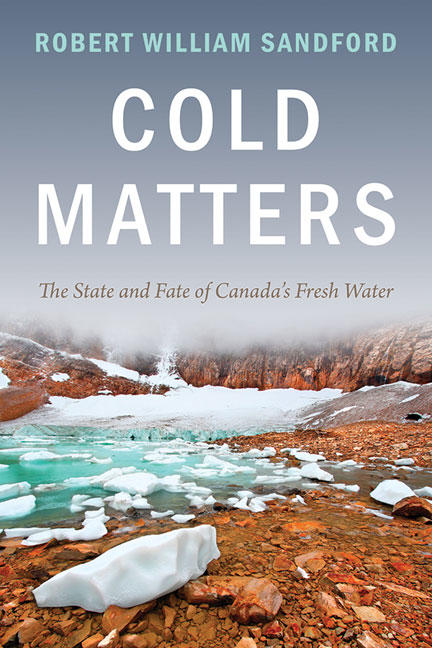 Cold Matters is a vital and approachable work that distills the scientific complexities of snow, ice, water and climate and presents the global implications of research put forth and funded by the Canadian Foundation for Climate and Atmospheric Sciences. This timely book gives the concerned reader an opportunity to take part in the conversation about our global environment in a way that transcends traditional scientific journals, textbooks, public talks or newspaper articles that are so often ignored or forgotten. In the end, Cold Matters will change the way you think about ice and snow.

The impassioned narrative and sophisticated illustrations found within the pages of Robert Sandford’s latest work offer ecologically and globally minded citizens an understanding of the behaviour of our ever-changing climate system and its effect on cold environments in western Canada over the past 400 years. Using revolutionary prediction scenarios to model glaciers and glacier meltwater in British Columbia, Alberta, Saskatchewan, Ontario, Yukon, NWT and throughout the world, Cold Matters presents a clear snapshot of how altered ecosystems will impact future climates, urban centres and agricultural landscapes.

This is an incredibly important book. Robert Sandford translates complicated science to explain how climate affects snow and ice packs, which in turn threatens our precious water supplies and watersheds. I, for one, am deeply grateful for this book. I only hope those in power will hear its crucial message.—Maude Barlow, national chairperson of the Council of Canadians and author of the international bestseller Blue Covenant: The Global Water Crisis and The Coming Battle for the Right to Water

Can you imagine a Canada without glaciers? It's a crazy and chilling thought, yet this seemingly unthinkable future is not only plausible but probable, according to dozens of leading scientists studying ice, snow, and water in Canada. Robert Sandford eloquently translates their complex research into an astonishing book about the effects climate change is already having and will have in the future unless we respond to this crisis with a degree of urgency sorely missing to date.—David R. Boyd, Adjunct Professor, Resource and Environmental Management, Simon Fraser University and author of The Environmental Rights Revolution: A Global Study of Constitutions, Human Rights, and the Environment