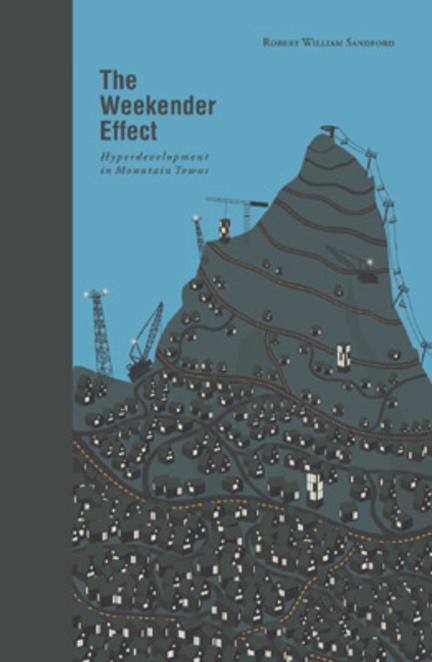 Praise for The Weekender Effect:

What happens to paradise when you carve it up into lots and sell it? Bob Sandford writes about it with clarity and a deep love of the places he knows so well. Sandford's story of one town's mutation from a quiet mountain haven to an overcrowded, generic 'outpost of globalization' is essential reading for those who care about community and our last few glorious spaces. —Thomas Wharton, author of Icefields, Salamander and The Logogryph

Equal parts manifesto, meditation, and love song to mountain communities everywhere, this calmly passionate book belongs in every house, condo, tent and backpack in the mountain West and on university courses on nature writing, the environment, community, citizenship, sense of place, human geography and many more. This is essential reading for anyone who lives in, lusts after or loves the mountains. —Pamela Banting, President, Association for Literature, the Environment and Culture in Canada

As cities continue to grow at unprecedented rates, more and more people are looking for peaceful, weekend retreats in mountain or rural communities. More often than not, these retreats are found in and around resorts or places of natural beauty. As a result, what once were small towns are fast becoming mini cities, complete with expensive housing, fast food, traffic snarls and environmental damage, all with little or no thought for the importance of local history, local people and local culture.

The Weekender Effect is a passionate plea for considered development in these bedroom communities and for the necessary preservation of local values, cultures and landscapes.

Sandford takes a refreshingly positive spin on the future of these communities. Current trends in land development threaten the integrity and value of these communities, he acknowledges, but all is not lost if we can learn from the recent history of the "Mountain West."—Jeremy Derksen, Vue Weekyl

I agree that The Weekender Effect is a passionate plea, and a good one. While it does focus on North America’s Mountain West, its lessons are transferable, especially the contemplation of just what is "sense of place"—does it still exist, and if so, how can we foster it and use it as a tool to conserve what unique rural communities and values we have left? The Weekender Effect should be compulsory reading for anyone planning to leave their city life and head for the hills to secure their"place in the woods."—The Mountain Library blog

Making oneself at home in a place takes time, and will be achieved not by attempting to seal oneself off from change, but by working with others to discuss, develop and implement a form of community that is both flexible and resilient. It is this underlying ethos that makes The Weekender Effect necessary reading.—Jenny Kerber, The Goose

This is a passionate essay on the state of urban development in Rocky Mountain communities of Canada. His book, which is academic in tone, is loosely divided into three sections. In the first section, Sandford praises our efforts in preserving the pristine environment of the Canadian Rockies, particularly through the creation of the 23,000 square kilometre Canadian Rocky Mountain Parks World Heritage Site. In his view, it is not what we “have built that makes us truly unique as a culture, but what we have saved.” In the second section he talks about Rocky Mountain communities where developers have not been sensitive to local values, culture and landscapes. The third section provides an example of one mountain community, Canmore, Alberta, that has suffered as a result of poor urban planning.

"Deep and meaningful connections to place are a fundamental element of what makes us human."

The Weekender Effect is another one of RMB’s slim little manifesto series. It is narrated by long-time Canmore resident Robert Sandford, who I later found out, is a prominent ecological activist and environmental steward from the Rocky Mountain Parks area. Much of the manifesto is exactly what one would expect from a small, idyllic, mountain-town resident who is seeing his community erode as giant influxes of weekend residents arrive and snap up investment properties–he’s not too happy. Surprisingly however, he provides a well researched, discourse on the metaphysical aspects of place, which he attempts to balance in a non-whiny way as he paints the somber evolution of the town.

I was anticipating a pedantic analysis of urban migratory patterns, coming from a small-town biased “we were here first” type narrative. Instead, I was taken aback by how many of the nuanced steps in the development of sense of place he was able to pick up on.

Tourist economies are just as volatile as the bust-boom of the resource cycles, and should be approached with a degree of cautiousness. As described in his essay, the mountain parks are fortunate enough that they have a huge swath of territory conserved and set aside, making true preservation and conservation of megafauna possible.

Sandford also because paradoxical when describing the successes of tourism. He proudly touts the 7 million vists a year to Canadian Rocky Mountain Parks and then is quick to criticize the “wealthy urbanites from around the world who have decided that living in this largely protected landscape is preferable to living in the often corroded and dirty places they helped build.” The “little” things, often done for the safety and comfort of permanent residents (like the highway adding more passing lanes, rumble strips and pull-outs), also facilitates an increased amount of traffic, and definitely erodes barriers of migrants into the area.

I really grappled with Sandford's piece: it was thoughtful and resonating.
Thanks to RMB and Bob Sandford for a great, thought-provoking book-highly recommended.