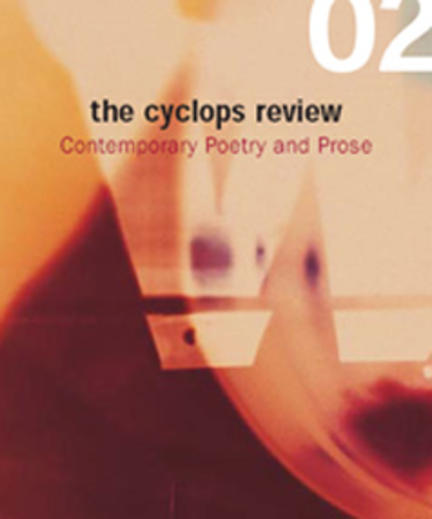 The Cyclops Review is a collection of new poetry and prose which features an eclectic mix of literary writers. From emerging writers, publishing their work for the first time, to established award-winning poets, fiction writers and playwrights, this collection captures the spirit of the small press publishing experience. Whether the authorial voice is emerging or established, what is consistent is the astounding literary diversity and quality of this collection.

Stephanie Bolster’s first book, White Stone: The Alice Poems (Signal/Véhicule), won the Governor General`s Award and the Gerald Lampert Award in 1998 and will appear in French with Les Éditions du Noroît in autumn 2007, translated by Daniel Canty. She has also published Two Bowls of Milk (McClelland & Stewart), which won the Archibald Lampman Award and was shortlisted for the Trillium Award, and Pavilion (McClelland & Stewart). Her work has appeared in literary journals internationally and has also garnered her the Bronwen Wallace Award, the Norma Epstein Award, and The Malahat Review`s Long Poem Prize. Her several chapbooks include, most recently, Biodôme (above/ground) and Past the Roman Arena and the Cedar of Lebanon (Delirium). She is the editor of The Ishtar Gate: Last and Selected Poems (McGill-Queen’s) by the late Ottawa poet Diana Brebner and is currently editing an anthology of poetry and prose excerpts pertaining to zoos. Raised in Burnaby, B.C., she now lives in Montréal, where she teaches in the creative writing programme at Concordia University.

Daniel Brooks has worked as a director writer, actor, producer, and teacher. He is a mainstay of this countryâ??s theatre, working with a network of Ontario-based writers, playwrights, and directors who virtually define the current scene (Guillermo Verdecchia, Daniel MacIvor, and John Mighton among them). He has been co-director of the Augusta Company and da da kamera, and playwright-in-residence at Tarragon Theatre. He is currently Artistic Director of Necessary Angel Theatre Company.

Daniel has won several awards, including the Chalmers (for Noam Chomsky, Here Lies Henry, House), the Dora Mavor Moore Award three times for directing, the Edinburgh Fringe First Award (Here Lies Henry); and has been nominated for the Governor Generalâ??s Literary Award (Noam Chomsky). In October 2000, he won the Capital Critics Circle Award for his direction of Possible Worlds. In October 2001, he received the first Elinore and Lou Siminovitch Prize in Theatre.

Daniel has also worked in film, notably with Bruce McDonald (whose film Highway 61 was inspired by Pokey.)

His highly innovative work has travelled across Canada and around the world. He is married to Jennifer Ross. They have two daughters, and live in Toronto.

Jason Camlot is the author of three previous collections of poetry, The Debaucher (Insomniac Press, 2008), Attention All Typewriters (DC Books, 2005), and The Animal Library (DC Books, 2001). He co-edited the essay anthology Language Acts (Vehicule Press, 2007), about English-language poetry in Québec, and has done extensive research into sound recordings of 19th- and 20th-century poetry. Jason teaches Victorian literature, among other things, at Concordia University in Montreal. He edits the Punchy Poetry imprint for DC Books.

Kate Hallâ??s poems have appeared in many journals, including The Colorado Review, jubilat, Swerve, The Denver Quarterly, Open City, LIT and Boston Review. She has won the Irving Layton Award and the David McKeen Award and travelled on the storied Wave Books poetry bus tour in 2006. She was co-editor of the Delirium Press chapbooks and co-hosted the Departure Reading Series in Montreal, where she now lives and teaches at McGill University.

Clive Holden writes fiction and poetry and has made two experimental films, Gordon's Head and Hitler!, both of which are about his relationship with his schizophrenic brother, Niall.

Poet and novelist Catherine Hunter has published three collections of poetry, Necessary Crimes, Lunar Wake, and Latent Heat (which won the Manitoba Book of the Year Award); three thrillers, Where Shadows Burn, The Dead of Midnight, and Queen of Diamonds (Ravenstone Press); the novella In the First Early Days of My Death; and the spoken word CD Rush Hour (Cyclops Press), which includes a bonus track featuring The Weakerthans. Two of her novels have been translated into German. Her essays, reviews, and poems appear in many journals and anthologies, including Essays on Canadian Writing, The Malahat Review, West Coast Line, Prairie Fire, CV2, The Echoing Years: Contemporary Poetry from Canada and Ireland, and Best Canadian Poems 2013. She edited Before the First Word: The Poetry of Lorna Crozier, and for ten years she was the editor of The Muses’ Company press. She teaches English and Creative Writing at the University of Winnipeg.

Daphne Marlatt
Daphne Marlatt was at the centre of the West Coast poetry movement of the 1960s, studying at UBC and with many of Donald Allen’s New American Poets, most notably Robert Creeley. Her writing includes prose narratives on the Strathcona neighbourhood of Vancouver and of Steveston and several poetry books. In early 2006, she was appointed to the Order of Canada in recognition of a lifetime of distinguished service to Canadian culture.

Toyoshi Yoshihara
Toyoshi Yoshihara is an award-winning translator who has worked tirelessly to introduce English-language works of drama to Japanese audiences. A Canadian industrialist, he has translated over seventy Canadian plays into Japanese; heads the Maple Leaf Theatre in Japan; and is an honorary lifetime member of the Canadian Association for Theatre Research.

Chandra Mayor is a Winnipeg poet and editor. She has worked with dark leisure, Contemporary Verse 2, and Prairie Fire. Her work is included in the Cyclops Review. Her first collection of poetry, August Witch, was released in Fall 2002.

Born in Ottawa in 1970 at the late lamented Grace Hospital on Wellington Street near Parkdale Avenue, rob mclennan currently lives in directly between Ottawa`s Chinatown and Little Italy neighbourhoods, and was called "Centretown`s poet laureate" by David Gladstone in The Centretown Buzz in the mid-1990s. The author of twelve previous trade poetry collections in Canada and England, he has published poetry, fiction, interviews, reviews and columns in over two hundred publications in fourteen countries and in four languages, and done reading tours in five countries on two continents. The editor/publisher of above/ground press and the long poem magazine STANZAS (both founded in 1993), the online critical journal Poetics.ca (with Ottawa poet Stephen Brockwell) and the Ottawa poetry annual ottawater (ottawater.com), he edits the ongoing Cauldron Books series through Broken Jaw Press, edited the anthologies Evergreen: six new poets (Black Moss Press), side/lines: a new canadian poetics (Insomniac Press), GROUNDSWELL: the best of above/ground press, 1993-2003 (Broken Jaw Press) and Decalogue: ten Ottawa poets (Chaudiere Books), and runs the semi-annual ottawa small press book fair, which he co-founded in 1994, currently under the umbrella of the small press action network - ottawa (span-o), which he also runs. Fall 2007 sees the appearance of a new poetry collection with Ireland`s Salmon Publishing, a collection of literary essays appears with Toronto`s ECW Press, and a title for Vancouver publisher Arsenal Pulp Press, Ottawa: The Unknown City. His online home is at www.track0.com/rob_mclennan, and he often posts reviews, essays, rants and other nonsense at www.robmclennan.blogspot.com.

Daniel David Moses, playwright and poet, is a Delaware who was born at Ohsweken, Ontario on the Six Nations lands. Now living in Toronto, he writes and works with Native and cross-cultural organizations. He is the author of Coyote City, nominated for the 1991 Governor General's Award for Drama, and The Dreaming Beauty, Big Buck City, Almighty Voice and His Wife, and The Mite Lines, a book of poetry. He is co-editor with Terry Goldie of An Anthology of Canadian Native Literature in English.

John K. Samson is the singer and songwriter for the venerated indie rock outfit The Weakerthans, and his poetry and prose has appeared in Matrix Magazine, Geist, The Believer,Â and Post Prairieâ”An Anthology of New Poetry. He lives in Winnipeg, where he’s also the managing editor and co-founder of ARP, a small publishing house.

The Most Spontaneous Thing

Walking toward Bank Street in winter, cold showing in our breaths. You leapt

pressed my back down against what would have been a raised flowerbed in summer, your mouth planting kisses.

The whole few seconds, I was thinking: what if someone's looking, what if in my backpack I carried some blown glass ornament you didn't know about?

I'm Not Scared of You or Anything

Other titles by Stephanie Bolster

A Page from the Wonders of Life on Earth

Animals in Zoos in Poems

Other titles by Daniel Brooks

The Full Light of Day

Other titles by Robert Budde

Other titles by Jason Camlot

What The World Said

Other titles by Corey Frost

The Broadview Pocket Guide to Writing: A Concise Handbook for Students - Fourth Edition

The Broadview Guide to Writing: A Handbook for Students - Sixth Edition

Other titles by Kate Hall

Other titles by Clive Holden

In the First Early Days of My Death

Other titles by Daphne Marlatt

The Poetry of Daphne Marlatt

Vancouver Poems Then and Now

Other titles by Chandra Mayor

All the Pretty Girls

Other titles by rob mclennan

the book of smaller

Halt Which is Empty, A

Other titles by Daniel David Moses

A Small Essay on the Largeness of Light and Other Poems

The Exile Book of Native Canadian Fiction and Drama

Pursued by a Bear

An Anthology of Canadian Native Literature in English

How Individuality Became The New Conformity