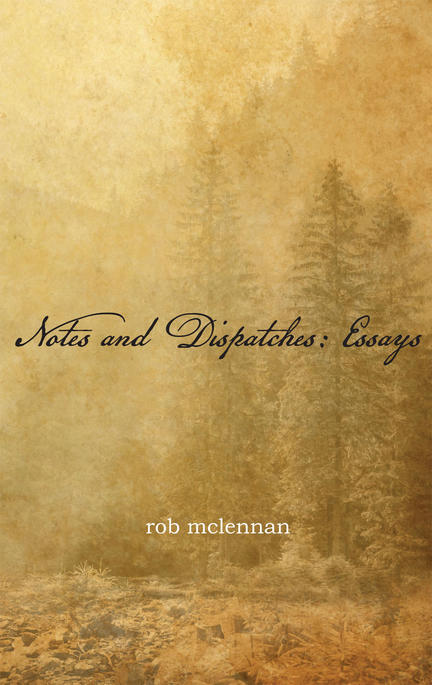 Rob McLennan is one of the most original and engaging literary commentators in Canada. Notes and Dispatches is the first collection of his essays, reviews and interviews. The collection ranges widely from an interview with Ken Sparling to a review of Richard Brautigan's selected works to ruminations about the Chelsea Hotel. McLennan brings his unique perspective to each topic as his keen eye reveals sudden depth and understanding to every subject.

Born in Ottawa in 1970 at the late lamented Grace Hospital on Wellington Street near Parkdale Avenue, rob mclennan currently lives in directly between Ottawa`s Chinatown and Little Italy neighbourhoods, and was called "Centretown`s poet laureate" by David Gladstone in The Centretown Buzz in the mid-1990s. The author of twelve previous trade poetry collections in Canada and England, he has published poetry, fiction, interviews, reviews and columns in over two hundred publications in fourteen countries and in four languages, and done reading tours in five countries on two continents. The editor/publisher of above/ground press and the long poem magazine STANZAS (both founded in 1993), the online critical journal Poetics.ca (with Ottawa poet Stephen Brockwell) and the Ottawa poetry annual ottawater (ottawater.com), he edits the ongoing Cauldron Books series through Broken Jaw Press, edited the anthologies Evergreen: six new poets (Black Moss Press), side/lines: a new canadian poetics (Insomniac Press), GROUNDSWELL: the best of above/ground press, 1993-2003 (Broken Jaw Press) and Decalogue: ten Ottawa poets (Chaudiere Books), and runs the semi-annual ottawa small press book fair, which he co-founded in 1994, currently under the umbrella of the small press action network - ottawa (span-o), which he also runs. Fall 2007 sees the appearance of a new poetry collection with Ireland`s Salmon Publishing, a collection of literary essays appears with Toronto`s ECW Press, and a title for Vancouver publisher Arsenal Pulp Press, Ottawa: The Unknown City. His online home is at www.track0.com/rob_mclennan, and he often posts reviews, essays, rants and other nonsense at www.robmclennan.blogspot.com.

Other titles by rob mclennan

the book of smaller

Halt Which is Empty, A