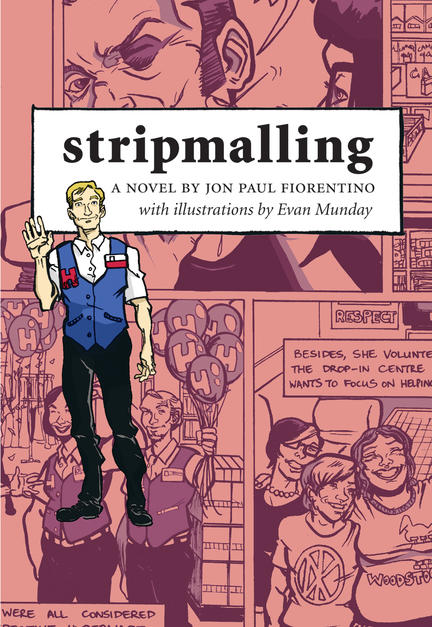 Part graphic novel, part journal, this tale follows one young man's embarrassing and hilarious journey to literary awareness. Jonny lives and works in a suburban strip mall but dreams of being a writer. He already possesses most of the elements needed to realize his dream—a supportive girlfriend, an active imagination, and an abundance of subject matter—but nonetheless finds his literary pursuits impeded by his own relentless stupidity. From big-box capitalism to growing up in the 21st century, Jonny's irreverent musings are captivating and deceivingly wise.

?Fiorentino is wickedly funny.”  “The Globe and Mail

"Both a semi-autobiographical first novel from Winnipeg-born author Jon Paul Fiorentino and something more complex and metafictional....A collage-like experience, Stripmalling is a hybrid book forged out of multiple angles and perspectives. It is also a funny and clever experiment in tale-telling.  “Quill & Quire

"Outrageous, intriguing and quietly powerful, Stripmalling offers readers the curious and ultimately rewarding experience of stepping outside their own stories."  “Scene Magazine

"Expands our concept of what makes something worth reading...[Jonny is] a metafictional anti-hero for the new millennium."  “Fiction Writers Review

"What Jon Paul Fiorentino is up to is sly and self-effacing, deeply real and hilarious. Stripmalling is an absolute bender."  “Emily Schultz, author, Joyland

"This incredibly comedic, somewhat tragic literary work is unlike anything you'll read, ever. Fiorentino details the desperate life of an aspiring writer with wit, oddness, and complexity."  “Joe Meno, author, Tender as Hellfire

I'm Not Scared of You or Anything