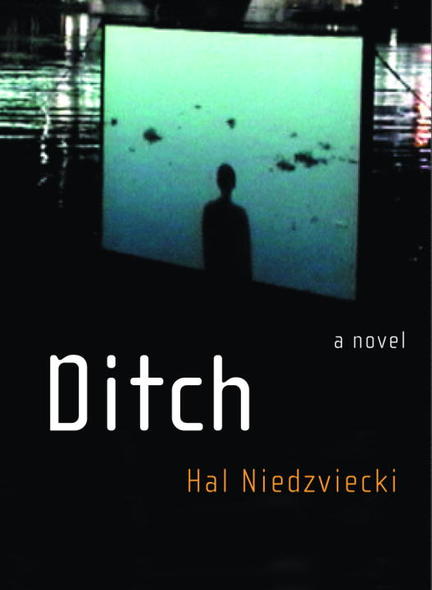 Ditch is a subversive, compelling portrait of a young man's plunge into adulthood, set in Toronto, Buffalo and the suburbs of Maryland. Niedzviecki's prose quickly dumps you into the head of Ditch, awkward, aimless, endearing — still living with his mom, driving a delivery van to get by — and into the rather more complicated mind, diary, e-mail and website of a young runaway who moves into the upstairs apartment. Debs is beautiful, tortured and much projected upon, largely because of the kind of pictures of herself she puts up on her website. Both she and Ditch are searching for absent pasts and possible futures, and Debs is on the run from something particularly nasty.

Ditch is a sudden stumble into an instantly recognizable, constantly shifting, unforgettable world where everything happens through the filters of memory and modems.

He sits down on a bulging pillow stuffed into a wicker chair. The walls of the living room are each painted a different colour: orange, green, purple, yellow.

The ceiling has clouds, blue, grey.

“You ever think about going crazy?” Suzie calls from the kitchen.

She fills two short glasses. A bottle of something clear. She strikes a match. The lights go out.

“Hey,” Ditch says. No windows, just the walls in nursery colours. Suzie appears, walking slowly. She puts the candle down on a stack of fashion magazines. The fire flickers. She raises her other hand to Ditch so that he can slide a glass out from between her fingers.

“Terrible,” she says. She laughs. “I try not to think about stuff like that.” She looks at him. “But sometimes...I’m glad you’re here. I’m sorry, I didn’t mean – before – You’re not drinking?”

His palms are wet. He raises the glass to his lips, coughs, forces the rest down. He feels his face turn red. He coughs again, tries to say something, the words catch. He looks down at his knees.
“You get used to it,” Suzie says. She crouches on the floor in front of him. Her eyes shine. The candle shadows his stretched legs.

She puts her hand on his knee.

Debs, he thinks. He doesn’t know what she looks like. He can picture her. He breathes in the air.
Suzie jumps up from her squat. Her breasts shift under the gold top. The back of the van, street lights blasting through, lips stretched, neck stuttering. Lump in his throat. Ditch adjusts himself against his jeans. Suzie spins around. A lock of her hair escapes from its crafted shell. It curls down her forehead, a brown trickle. She twirls into Ditch’s legs, falls, spreads over him.

Ditch puts a hand on her soft damp back.

She leads the way to the bed, giggling, refusing to turn on any lights. In the bedroom a pale street lamp catches her through the window. Ditch looks at her breasts, touches them, thinks of her face in frames of cold light, the permeable darkness.

She pushes him away.

“Take your pants off.”

He pulls out of his wet jeans.

Later, walking back, he remembers it. He thinks that it wasn’t what he expected. Not the thing itself, exactly, but the why of it, the how of it. Stopping suddenly, he checks his pockets, feels like he left something there, feels like he’s late for an appointment he never made. Cancel, postpone, reschedule, call in sick. A loss more tangible than any act of truancy. He doesn’t know where he’s supposed to be. In front of his own door, he stops just short of ringing the bell, like a stranger would. What’s she doing up there? he thinks. And: I’ll never be home again.

"From the wilderness of urban chaos emerges Hal Niedzviecki...guru to a new generation of young writers determined to break the bonds of mediocrity that enslave much of the Canadian book publishing industry" —Quarry Magazine
“When Hal Niedzviecki’s name gets bandied about, especially in the alternative press, he’s dubbed things like ‘underground guru’ and ‘pop culture messiah.’” —The Annex Gleaner (Toronto)
“Niedzviecki has become the articulate spokes-slacker for Canadian underground culture — talk-show guest, correspondent for CBC Radio’s Brave New Waves, Marginalia columnist at the National Post.” —Monday Magazine (Victoria)
Advance Praise for Ditch:
“Rarely do we come across a book whose characters believe in so little yet are capable of generating so much meaning. This is prose attuned to the quick-step tempo of contemporary urban life, intensity without the density. Sad, yes — sentimental, no.” —Michael Turner

“A solemn and poignant quest for friendship and lost fathers set in the numb and crumbling inner-city. Think Camus’s L’Etranger meeting Alan Lightman’s The Diagnosis, and you'll get a sense of Ditch’s innovative blend of internet intimacy and social estrangement. Niedzviecki has written a rich and strange book.” —Michael Winter

How Individuality Became The New Conformity