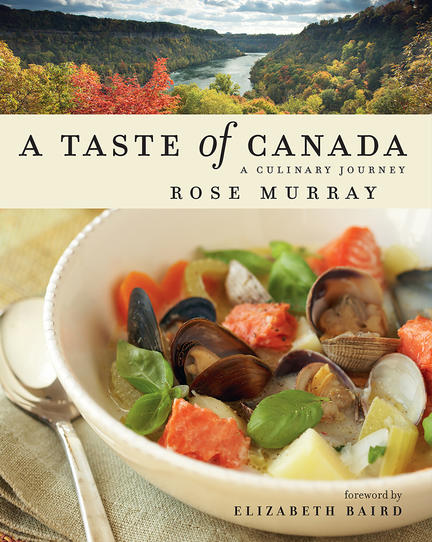 Discover the foods that have defined and are redefining Canadian cuisine. The incredibly varied regions of Canada all have their own unique culinary character due to contrasts in geography, climate and history and the backgrounds of people who inhabit these regions. Food traditions of indigenous peoples and those brought by newcomers, together with this country’s magnificent resources—rich farmland, an abundance of fresh water and oceans on three sides—have formed a unique cuisine that is distinctly Canadian. In A Taste of Canada: A Culinary Journey, Rose Murray provides a collection of classic and contemporary Canadian dishes that is a true celebration of this country’s unique palate. Regional ingredients are highlighted throughout, and special menus have been created to reflect each region’s gastronomic personality, whether it is a traditional holiday menu or a picnic in Stanley Park. Taste of Canada works especially well in this beautiful highly-designed ebook format with its full colour pictures of Canada and the wonderful food within and its essays on Canada’s rich culinary history and anecdotes about the author’s family, friends and travels. A perfect blend of story and food, A Taste of Canada is one ebook that should be on everyone’s ibooks library.

Rose Murray has been a key player in the Canadian food scene for almost three decades. Through authoring 10 cookbooks, writing for a host of magazines and newspapers, teaching cuisine at various colleges and cooking schools, and making many television and radio appearances, Rose has helped shape Canada’s culinary landscape since 1979. Growing up on a self-sustaining mixed farm near Collingwood, Ontario, Rose learned the art of growing your own food, as well as cooking and preserving it, at a very young age. It is no wonder that she has come to be considered a national expert on the agricultural traditions that go into our food. After finishing a degree in English from Trinity College at the University of Toronto, Rose went on to teach high school English. Over the years, food started to become a serious interest for Rose again, which led her to more formal food studies in Paris at renowned cooking schools such as Cordon Bleu, La Varenne and Ecole de Gastronomie Francaise Ritze-Escoffier. Rose also took classes in Costa Rica, Hong Kong and Thailand further developing her knowledge and understanding of international food and culture. Back in Canada, Rose has traveled across the country studying Canada’s culinary landscape. From fishing for salmon off Vancouver Island, B.C. and partaking in fall suppers in Saskatchewan to gathering wild rice in Ontario and digging for clams on Prince Edward Island, Rose has experienced what makes up Canada’s culinary fabric first hand. She has channeled this knowledge into her books A Taste of Canada and Canada's Favourite Recipes (out Fall 2012). Rose has two grown children and two grandchildren and now lives in Cambridge, Ontario with her husband Kent.

Other titles by Rose Murray

From asparagus to zucchini and everything in between, 250+ delicious and simple recipes

The Classic Guide to Holiday Feasts

Year In My Kitchen