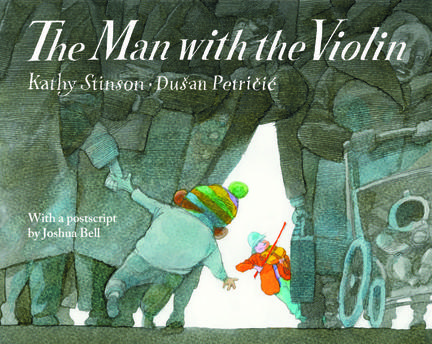 Who is playing that beautiful music in the subway? And why is nobody listening?

This gorgeous picture book is based on the true story of Joshua Bell, the renowned American violinist who famously took his instrument down into the Washington D.C. subway for a free concert. More than a thousand commuters rushed by him, but only seven stopped to listen for more than a minute. In The Man with the Violin, bestselling author Kathy Stinson has woven a heart-warming story that reminds us all to stop and appreciate the beauty that surrounds us.

Dylan is someone who notices things. His mom is someone who doesn’t. So try as he might, Dylan can’t get his mom to listen to the man playing the violin in the subway station. But Dylan is swept away by the soaring and swooping notes that fill the air as crowds of oblivious people rush by. With the beautiful music in his head all day long, Dylan can’t forget the violinist, and finally succeeds in making his mother stop and listen, too.

Vividly imagined text combined with illustrations that pulse with energy and movement expertly demonstrate the transformative power of music. With a postscript explaining Joshua Bell’s story, and afterword by Joshua Bell himself.

“This captivating tale is a beautiful balance between a simple but powerful text and illustrations that are full of vitality and rhythm.”

“Find that book and open to page one. Sigh. Swoon. Hooked.”

“In a world of sounds that aren’t always as pleasant as a Stradivarius, Stinson and Petricic remind readers young (and especially old) to stop and listen to the arpeggios.”

“This is a lyrical explanation of the value of the arts in the human experience.”

“A rich springboard for creative learning across the curriculum . . . a must for any classroom or school library.”

“The author and illustrator bring music to life in this touching book that reminds us of the curious nature of children, and their ability to notice things that adults ignore.”

The Deakin Review of Children’s Literature, 02/14

“I want to read it over and over again . . . I want it to get attention, lots of attention, because that’s what it deserves.”

“The art work is stunning; sophisticated, yet sensible enough to appeal to children.”

“A wonderful tale about the importance of music in one’s life relayed in a simple, entertaining manner.”

“The story is simple, but the language has its own musicality . . . gorgeous illustrations . . . are as light and lucid as they are satirical.”

“A fine reminder of the old adage to stop and smell the roses.”

“Imaginatively illustrated and beautifully written, this offbeat ode to the power of music is a winner.”

“The art bursts forth, creating a stunning visual expression of Stinson’s text.”

“This is a lyrical explanation of the value of the arts in the human experience.”

“The art bursts forth, creating a stunning visual expression of Stinson’s text.”

“A brilliant portrayal of the sensitivities of children and the sad loss of that wonder by most adults.”

“Stinson’s melodious descriptions and Petricic’s colourful swirls seem to envelop the reader, captivating them just like the music captivates Dylan.”

Seeds of a Story: Part Two

Part Two of our responses from Canadian Children's Book Centre Awards nominees on how their stories were inspired.