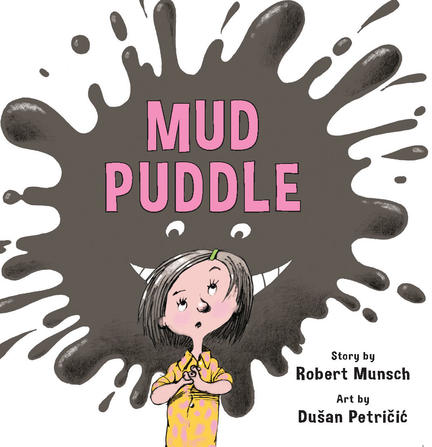 Whenever Jule Ann goes outside, a Mud Puddle jumps on her and gets her muddy all over. But she defeats it with cheerful ingenuity and two bars of smelly yellow soap. As in all Munsch stories, kids are the heroes!

About the Annikin Series: Annikins are mini books made especially for children—small enough to fit into tiny hands and pockets. Each book measures 3 1/2" x 3 1/2" and contains full color pages.

“Whether you are a long-time fan of the incredible Robert Munsch or not, you will surely enjoy this clever tale.”

“[Petricic’s art] gives it a fresh look for young readers and will delight a new audience.”

“Young preschoolers will love the mucky action and detail.”

“A perfect example of how Munsch’s stories can elicit joy from, and provide amusement to, both younger and older readers all over the globe.”

“This book is sure to be popular with fans of Robert Munsch, young and old.”

A Trio of Tolerable Tales