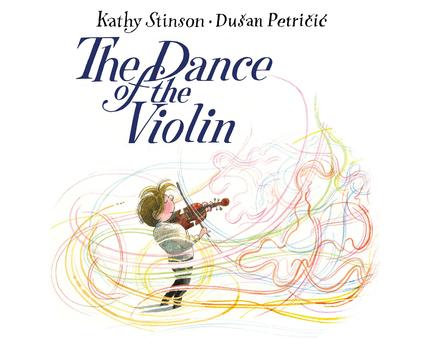 Even Joshua Bell makes mistakes, but there is always a second chance. As a young student of the violin, Joshua Bell learns about an international competition to be held in Kalamazoo, Michigan. He chooses a piece of music, which his teacher suggests may be too difficult, but Joshua is determined. It’s a piece of music he loves. At the competition, Joshua experiences the usual jitters. Once his name is called, he strides to the stage and begins to play, but almost immediately, he makes a mistake. As he is about to walk off the stage, he asks the judges if could try again. They agree, and this time, the playing is impeccable. Duan Petricic’s brilliant illustrations full of movement and color, capture the sounds made by Joshua’s violin, from the missed notes to the swirling, uplifting strains of the perfectly executed piece. Children will readily empathize with Joshua’s misstep, but they will also learn that there is always a second chance.

“Delightful illustrations, and a story with a great message about perseverance.”

“Magical realism is at its best in this delightful picture book . . . An excellent addition to most collections.”

“Children will readily empathize with Joshua’s misstep, but they will also learn the value of being given a second chance.”

“Children will readily empathize with Joshua's misstep, but they will also learn the value of being given a second chance.”

“[Petričić’s] deft illustrations . . . lift the story far beyond the text and make the reader appreciate the impact of art.”

“Readers feel the joy that music brings to this young boy, and envision it through the mixed media artwork so brilliantly created by an accomplished artist.”

“Petričić once again uses bright swoops and streaks of color to visualize the sensory joy that music can elicit as Stinson’s direct writing underscores the rewards of dedication to one’s art.”

“A picture book to remember.”

“Should give heart to any child trying to master an art.”

“A joyful reminder that perseverance pays off.”

“A joyous story about music and persistence.”

“A picture book that hits all the right notes.”

Notes from a Children's Librarian: Get Dancing

These picture books can’t teach you how to dance, but they can inspire you.