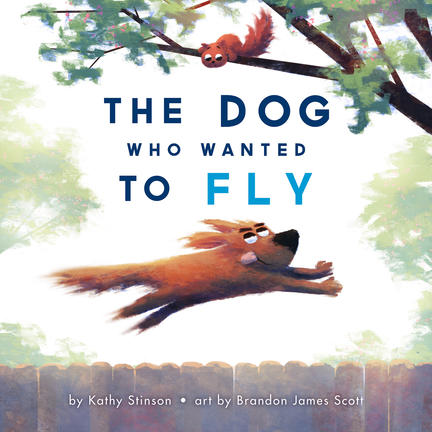 Meet Zora: a dog with a big dream and an even bigger personality. All Zora wants to do is learn how to fly so she can catch that pesky squirrel in her yard. But try as she might to prove to her friend Tully—a skeptical cat—that dogs truly can fly, nothing seems to work. Until Zora finds the right motivation, that is.

Kathy Stinson’s charming story of perseverance is beautifully brought to life by Brandon James Scott’s exuberant and wonderfully expressive illustration. Touching on themes of optimism and determination in the face of failure, The Dog Who Wanted to Fly is a book anyone—even a cat—will love.

Brandon James Scott is a creative director, illustrator, writer, and dad living in Toronto. He’s the creator of the award-winning animated series, Justin Time. Find him on Instagram @brandonjamesscott.

“A clever and endearing story, expertly illustrated, with an affirming message.” —Kirkus Reviews, 12/05/18

“Stinson will delight readers and listeners with her use of action words . . . Scott’s illustrations are equally evocative.” —Booklist, 03/15/19

“The expressive illustrations often say as much as the text. Kids will laugh out loud at the humorous story and lively pictures . . . This is one of the best picture books!”—I Heart Literacy, 02/11/19

“This delightful story of perseverance and heart is embedded in almost animated illustrations of the highest quality.” —Storywraps, 12/20/18

The Man with the Violin

Other titles by Brandon James Scott