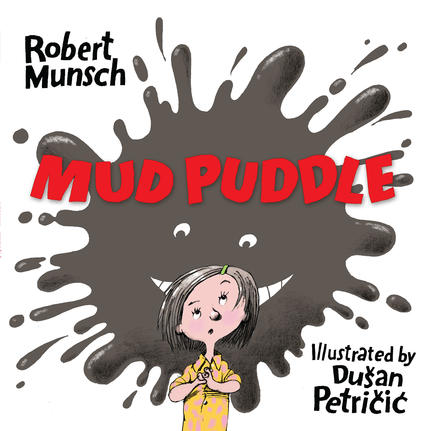 A brand-new look for a classic story.

First published in 1979, this was the first of Robert Munsch’s oral stories to be turned into a book. Since then, it has made countless children (and adults) all around the world laugh out loud.

When Jule Ann goes outside, a mud puddle jumps on her and gets her dirty all over. No sooner does her mother scrub her clean than she ventures out again, only to be pounced upon by the pesky mud puddle. The cycle continues until finally Jule Ann gets the better of the mud puddle with cheerful ingenuity and two bars of smelly yellow soap.

“... a perfect example of how Munsch’s stories can elicit joy from, and provide amusement to, both younger and older readers all over the globe.”—CM Reviews, 10/12

“Whether you are a long-time fan of the incredible Robert Munsch or not, you will surely enjoy this clever tale.” —Provo Library Children’s Book Review, 02/15/13

“... young preschoolers will love the mucky action and detail.”—Booklist, 10/12

“[Petricic’s art] gives it a fresh look for young readers and will delight a new audience.”—Sal’s Fiction Addiction, 08/31/12

“This book is sure to be popular with fans of Robert Munsch, young and old.”—Quebec Library Association, 08/13

These picture books about honesty run the gamut—from blatant lies to a mere fudging of the rules.