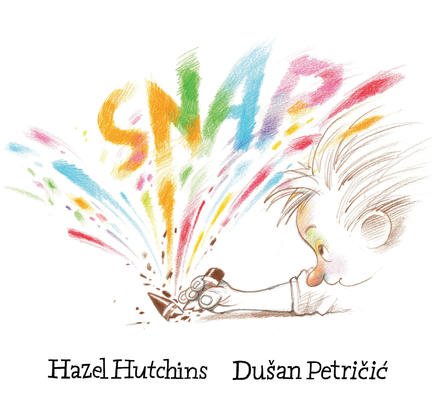 What could be more perfect than a brand new set of crayons? Evan can’t wait to use them, until Snap!, the brown one breaks in two. Then one by one, the others break, get crushed, are blown away, or simply disappear. How can he possibly draw when there’s no green, purple, or even black?

Evan feels like throwing things, but instead, he scribbles using all the bits and pieces that are left. But what’s this? Where yellow and blue cross, there’s green, and when blue and red get all mixed up, it creates just the right purple to draw monsters. Soon, all he’s left with are tiny stubs of red, yellow, and blue, but Evan discovers that even with just a few crayons, he can create new and exciting art¬—his imagination is the only tool he needs.

The winning combination of Hazel Hutchins’s lively text and Dušan Petričić’s ingenious illustrations make this a wonderful addition to every young child’s library.

“A fun story about creativity, frustration, and the ways in which hardships . . . ensure the use of imagination in problem solving.”

“The illustrations are just perfect for the story. The details and expressions are ingenious enriching the text so well.”

“Will become a favourite of all families and will make a great addition to any library or home.”

“A beautifully humorous ode to both pragmatism and imagination.”

“A sweet story to pair with other artistic titles in storytime.”

“The illustrations in this story are mesmerizing.”

“Uses repetition, onomatopoeia to great effect, creating a sense of rhythm and momentum.”