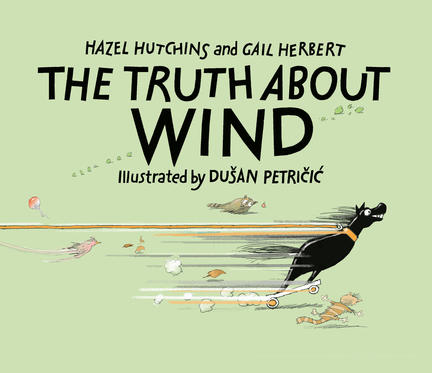 A vividly imagined story about the importance of telling the truth, even if it means losing something you love.

When Jesse finds a toy horse and makes it his very own, his imagination runs wild. This horse is the fastest horse in the whole world, so Jesse names him Wind. He can’t wait to race him across the prairie (the kitchen table) and over deep canyons (the bathtub). There’s just one problem: Wind doesn’t actually belong to Jesse. He was left behind accidentally by his real owners. And though at first Jesse is full of joy as he plays with Wind, soon he starts to feel uneasy—Jesse knows Wind’s real owners must miss him.

But how can Jesse explain to his mother exactly where Wind came from? And is there a way to make everything okay again? The Truth About Wind is a dynamic story about the courage it takes to face up to a lie, brought to life by a trio of celebrated creators.

“A wonderful adventure of childish imagination, with, at its core, an important idea about how dishonesty can spoil a beautiful thing. The book should find a place in many schools and public library picture book collections. Highly Recommended.”

“Hutchins and Herbert have created a complex, memorable character . . . This galloping story will engage young readers and prompt meaningful conversation.”

“A powerful picture book for launching conversations about honesty.”

“A great book to begin discussions about telling the truth and how keeping secrets can have a negative impact.”

“Hutchins and Herbert’s text is vivid, specific, and evocative; Petričić’s pencil-and-watercolor illustrations have a fun, cartoonish quality that perfectly suits the story, investing the nominally inanimate toy with a huge personality . . . Another child’s toy gained by mischance is a perfect vehicle for gently conveying the importance of honesty.”

Other titles by Gail Herbert