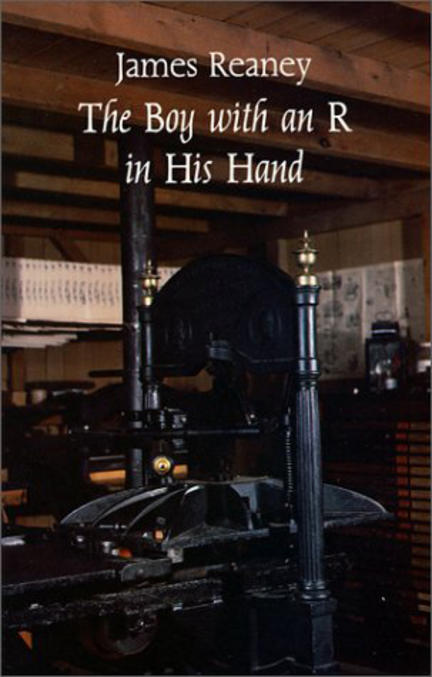 'It is a pleasure to find that James Reaney's first book for children, first published by Macmillan of Canada in 1965, has just been re-issued in a handsome paperback edition, complete with the original illustrations by Leo Rampen. The Boy with an R in His Hand tells the story of two orphan brothers who arrive in York from the Red River Settlement in 1826 and quickly become involved with the complex politics of Upper Canada. Joel, the elder brother, aligns himself with the Family Compact and his overbearing, stuffy uncle, while Alex, more imaginative and courageous, becomes an apprentice to William Lyon Mackenzie at the Colonial Advocate. There he (and the reader) learn in some detail about Mackenzie's press and the art of type-setting. Alex, rather improbably, ''had it set up right, and from that moment on his progress in the skill of type-setting was... like a house on fire.''

'This is a satisfying, fast-moving story, full of incident and detail about colonial life. It climaxes with the wrecking of Mackenzie's printshop and press by a band of young Tories acting with the implicit approval of the government, at the end of which Alex finds a single capital R, his souvenir of life as a printer's apprentice. Recommended for ages nine and up, as a piece of Canadiana which enlivens history for the young reader.' -- Marilyn Rueter, The Devil's Artisan.

'Reaney's Weltanschauung is evident in the way in which he exposes the period to criticism, provoking the reader to take sides. He exposes the corrupt Family Compact, ridiculing the Tory elite. He champions the underdog and shows Mackenzie as their champion spokesman. And all in terms that make sense to children. If you show how a servant is wrongly accused of theft, and the Reverend Doctor Strachan is implicated in convicting her, and then show how she is exonerated with Mackenzie's and Alec's help, you let children draw their own conclusions about the ruling class. You open up another path for children's minds to follow.

'Reaney has said in another context that it is a healthy act to expose the historically accepted past to close scrutiny and air revised conclusions. Sacrosanct humbug will tumble and people will enjoy the corrective. It is certainly refreshing for children to read this dialectical approach to our early history. What a boon that it is in print once more.'