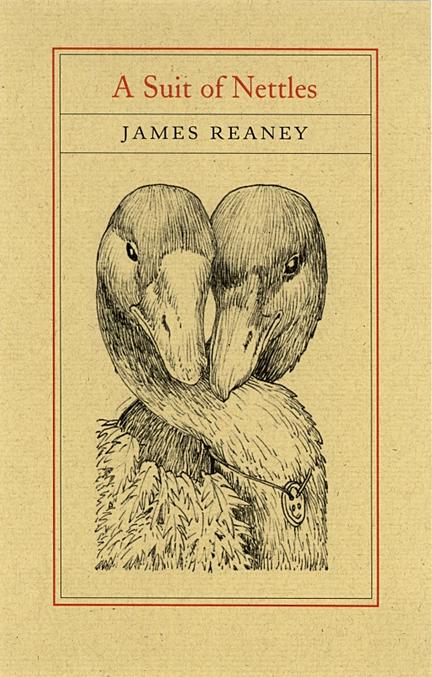 A new edition of James Reaney's classic long poem which has been described, variously, as 'the toughest and funniest, most literary and most serious long poem in English-Canadian literature' (Germaine Warkentin) and conversely as 'whimsical self-indulgence' (W. J. Keith). A Suit of Nettles won the Governor General's award for poetry in 1958.

Excerpt: A Suit of Nettles (by (author) James Reaney)

Invocation to the Muse of Satire

With Punch's stick (he holds it in his hand)
Beat fertility into a sterile land,
With hands of hawthorn branches in the winter,
And teeth of cold March rain that bite the soft snow,
And bristly porcupines on which the hunter sits for hair;
With skin of mildew and botfly holes poked through
In hide of long impounded, ancient cow,
With eyes whose tears have quotaed out to ice long ago,
Eyes bright as the critical light upon the white snow;
With arms of gallows wood beneath the bark
And torso made of a million hooked unhooking things,
And legs of stainless steel, knives & scythes bunched together,
And feet with harrows, and with discs for shoes-
Speak, Muse of Satire, to this broken pen
And from its blots and dribbling letter-strings
Unloose upon our farm & barnyard-medicine.

With those feet, dance upon their toes
With those legs, grasp them lovingly about the thighs
With that torso, press against their breasts
With those arms, hug them black and blue
With those eyes, look at them you love
With that cheek, rub against their cheeks
With that hair, put your head down in their laps
With those teeth, give forth playful bites
And shake their hands with hour-long explorations
Of their life and heart and mind-line,
But with that stick of which new ones spring ever
From that vine where it was barbarously cut off,
Beat them about the ears and the four senses
Until, like criminals lashed in famine time,
They bring forth something; until thy goad
Grows so warm it bursts into blossoms.
Here, lady, almost blind with seeing too much
Here is the land with spires and chimneys prickly,
Here is the east of the board and here the west,
Here may you enter and there, before you depart,
May you make the sky red with doom and axey wrath.

Has no one seen the country where your cure has nursed?
It is a land of upturned privies with occupants inside them
Crawling out through new tops like astonished moths
Bursting from their unusual, foul and dark cocoons.

The title of James Reaney's (1926--2008) book-length poem cycle, A Suit of Nettles, may ring a bell. Some may recall its acclaimed first publication in 1958; others will have read excerpts in the recent Essential James Reaney, also from Porcupine's Quill (and shortlisted for the 2010 ForeWord Book of the Year prize). Still others will think of a tale from the Brothers Grimm -- about a princess who weaves suits of nettles to return six enchanted swans to human form. Yet if this allusion informs Reaney's work, it is partly by way of contrast. For one thing, his protagonists are geese, not swans. For another, they never were human and never want to be. As the goose Mopsus sardonically puts it: 'Here look at man. I'll draw him in this dung.'

The joke ends up being on Mopsus, of course, when he and several other geese are butchered for Christmas dinner. But if this ending's implications reflect the work's scatological bent, they also play into its emphasis on cycles (vicious and otherwise). Echoing Edmund Spenser's sixteenth-century Shepherd's Calendar, Reaney divides his work into twelve chapters, one for each month. In keeping with pastoral protocol, these chapters display formally diverse poetic dialogues on a range of themes. Love features prominently, but so do Canadian history,1950s small-town life, and the conflict between traditional and progressive styles in education. For, whatever the geese think, this is the human world, albeit transformed by Reaney's pen. Jim Westergard's witty and elegant engravings in the new edition underscore this point.

Inevitably, given the nature of topical satire, not all of Reaney's jokes still resonate. And yet, to use one of the book's own metaphors, the merry-go-round of intellectual fashion sometimes comes full circle. Reaney's comments on the Great Depression, for instance, now seem freshly relevant. Although it sometimes settles for clever patter, the book's wit can also embody itself in memorable writing. High points include not only the boisterous invocation to the Muse of Satire, but also lyrics that strike a delicate balance between irony and genuine plaintiveness: 'I am like a hollow tree / Where the owl & weasel hide / I am like a hollow tree / Dead in the forest of his brothers.' The resulting book should appeal to a range of readers, including those interested in pastoral, in the work of Reaney's mentor Northrop Frye, and in Canadian history and literature in general.

'A Suit of Nettles by James Reaney is a strange chimera of a book, equal parts Edmund Spenser (the craft), Hillaire Belloc (the wit), and olde tyme county fair (the mood). At once a formally rigorous and imaginatively capricious, A Suit of Nettles is a weird and wonderful achievement.'