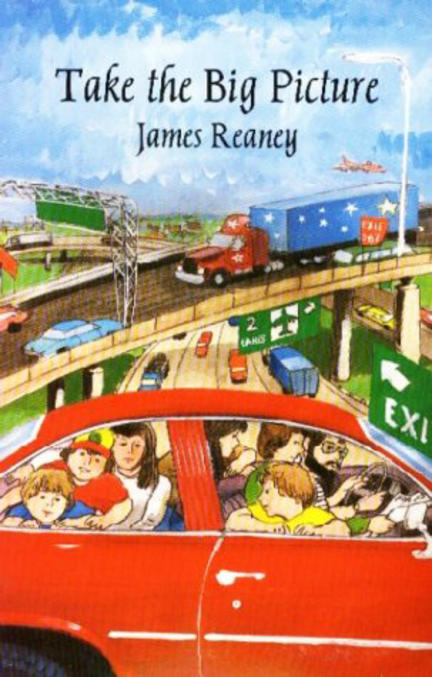 Was there ever such a family? Fired from his job at the University for letting all the mice free from their cages in the biology labs, Mr Delahay went home to find that his house was falling into the river. Moving into his mother's large, old house proved no solution. His equally large family -- two girls and four boys, three of them triplets -- were too mischievous and troublesome for his mother to stand. So she banished most of them to British Columbia where they had adventures with Sasquatches and a carwash owner named Buck whose life's dream it was to capture one of these Wild Men of the Woods. Returning to their home town in Ontario, the Delahays find that their having a home again depends on the oldest boy's skill at telling a story that will keep an eccentric old lady so interested she will let them stay with her yet one more night until she finds out how the story ends. Well, eventually, the story does have to end, but not before a great deal of hilarity and a great deal of wild adventures involving a motorbiker, a confidence woman masquerading as a baby sitter, and a leap through a Suicide Door. This is a different kind of story, filled with unexpected turns that even include a story within the story that you can try finishing yourself!

'Thank you for the review copy of Take the Big Picture by James Reaney. What a wonderful addition to children's literature! I loved it. I especially loved it because I live in Antler River but I know I would love it just as much if I lived in BC or PEI. This book will work wonders for teachers who want to get kids to read, write, speak, listen and imagine. I can imagine the sequels which will appear as children try to write an ending to the story within a story. Please make certain that teachers hear about this book. They all need it badly! It's a great read aloud book for certain but also fun for quiet reading and imagining! My thanks to you for this wonderful book.'

'Storyteller/playwright James Reaney has turned out the contents of his fertile brain, apparently writing down everything that came into it. Ingenuous, ingenious, silly, and quite funny in patches. Ages 9 to 14.'

'In an age of computer-composing, the conceit of writing only until the ink pot empties is ingenious: it is entirely in keeping with James Reaney's good old-fashioned narrative sense. A lively highway romp from British Columbia to Ontario as Andr? Delahay, recently fired university professor, returns with six progeny from a domestic sabbatical is balaned by life on the home front played out by Granny, his mother, and Lucy, mother of his unwieldy menage. The two family strands connect and, after a brief struggle with the elements and a pair of folksy criminals, reunite. In a delightful bit of instruction we learn that it is possible for the family unit to survive the onslaught of triplets, job loss, emotional breakdown and the three generation household. Equally remarkable is the wisdom of seventeen-year-old Colin who quite literally keeps the show on the road: he gently tames his three unruly five-year-old brothers with assists from the Sasquatch, the mythical beast of which the Terrible Three are mortally afraid. But then this is, after all, a romantic comedy in which trials and tribulations are either blessings in disguise or temporary setbacks on the narrative road to a happy resolution.

'All in all, the deft prose style combined with keen characterization and mystery will sustain the young reader's interest. The clever structure in which the camera zooms in on travellers and stay-at-homes alternatively, then switches skillfully from main story line to tale-within-tale provides the stuff story spells are made of. Intriguingly Reaney leads us to a grand finale in which experience and fancy merge in the yarn that is spun from them both. Since the ink well is dry we are encouraged to write beyond the ending and it is the measure of Reaney's accomplishment that the reader of any age will find the invitation irresistible.'