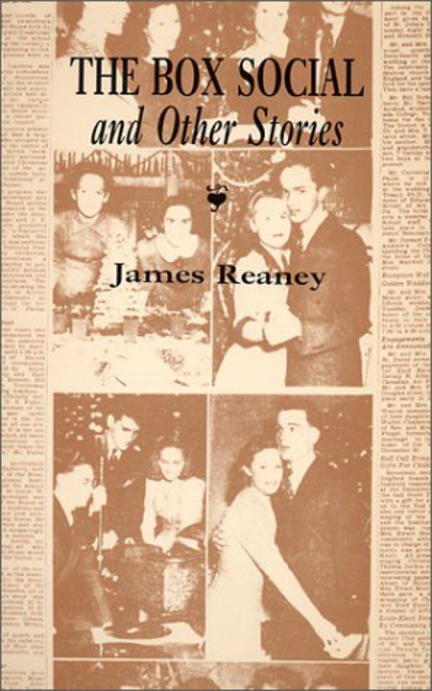 The Box Social & Other Stories gathers together nine of James Reaney's short fictions written in the 40s and early 50s and never previously collected in book form.

The collection takes its title from a short piece the author originally published in the University College Undergrad and which provoked a firestorm of eight hundred angry letters from subscribers when it was republished nationally in the New Liberty in the late 40s. It also thwarted the young author's designs on the editorship of the Undergrad because of his clear moral unsuitability for such an august position. (This is doubtful, because the Undergrad eventually came to be edited, thirty years later, by PQL publisher Tim Inkster.) 'The Box Social' is remarkable, not only that it introduced the theme of date rape to Canadian literature some thirty years before the phrase was coined, but also that it is told from Sylvia's point of view, and yet again that it ends with one of the quietest lines of literary vitriol imaginable ... ' ''I hated you so much,'' she said softly.'

If Alice Munro has put the sexually awakening female under glass in Lives of Girls and Women, then The Box Social could just as easily have been titled Lives of Boys and Men.

In 'The Bully', the brutality of what passes for etiquette in secondary school is contrasted with the simpler life of the farm personified in Noreen who drops grain in the shape of letters to feed her chickens -- 'so that when the hens ate the grain they were forced to spell out Noreen's initials or to form a cross and circle. There were just enough hens to make this rather an interesting game. Sometimes, I know, Noreen spelled out whole sentences in this way, a letter or two each night, and I often wondered to whom she was writing up in the sky.' 'The Bully' was included in The New Oxford Book of Canadian Short Stories edited by Margaret Atwood and Robert Weaver.

The young Margaret Atwood first encountered 'The Bully' as an undergraduate. She read the story, oddly enough, in an anthology edited by Robert Weaver, and the experience was apparently seminal to her own development as a writer of fiction ...

'Strong in local atmosphere, which is not used however for the purposes of strict realism, combining the comic with the pathetic, proceeding by an associative dream language, resolving itself through image rather than through plot alone, it offered us a whole new way of looking at the possibilities of the world available to us. In its methods it anticipates such writers as Gabriel Maria Marquez; I suppose if it appeared now it would be dubbed Magic Realism. But anyone who has read Alice Munro, Robertson Davies, Timothy Findley, Jane Urquhart, Marian Engel, Graeme Gibson or Barbara Gowdy -- those writers placed together by critic Michael Hurley under the banner 'Southern Ontario Gothic' -- cannot help but feel that they all inhabit the same literary landscape, and that it is one whose main features were defined earlier by James Reaney.

'And so it is with me. Without 'The Bully', my fiction would have followed other paths. If there are such things as 'key' reading experiences, 'The Bully' was certainly one of mine.'