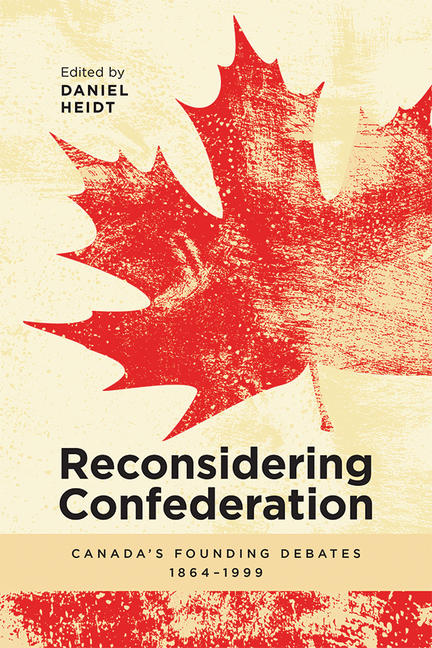 July 1st 1867 is celebrated as Canada's Confederation - the date that Canada became a country. But 1867 was only the beginning. As the country grew from a small dominion to a vast federation encompassing ten provinces, three territories, and hundreds of First Nations, its leaders repeatedly debated Canada's purpose, and the benefits and drawbacks of the choice to be Canadian.

Reconsidering Confederation brings together Canada's leading historians to explore how the provinces, territories, and Treaty areas became the political frameworks we know today. In partnership with The Confederation Debates, an ongoing crowdsourced, non-partisan, and non-profit initiative to digitize all of Canada's founding colonial and federal records, this book breaks new ground by integrating the treaties between Indigenous peoples and the Crown into our understanding of Confederation.

Rigorously researched and eminently readable, this book traces the unique paths that each province and territory took on their journey to Confederation. It shows the roots of regional and cultural grievances, as vital and controversial in early debates as they are today. Reconsidering Confederation tells the sometimes rocky, complex, and ongoing story of how Canada has become Canada.

Daniel Heidt is an independent scholar whose numerous publications focus on Ontario and Canadian political history, as well as the Arctic during the Cold War. He is the founder and manager of The Confederation Debates.

J.R. Miller is a professor emeritus of history at the University of Saskatchewan. He is the author of numerous works on issues related to Indigenous peoples including Skyscrapers Hide the Heavens and Shingwauk’s Vision, both published by University of Toronto Press.

Marcel Martel is a professor in the Department of History at York University, where he holds the Avie Bennett Historica Dominion Institute Chair in Canadian History. He is the author of Not This Time: Canadians, Public Policy, and the Marijuana Question, 1961-1975 (2006), Le Deuil d’un pays imaginé. Rêves, luttes et déroute du Canada français (1997), and co-author of Speaking Up. A History of Language and Politics in Canada and Quebec (2012).

Colin Coates was the host of the 2002 conference on "Majesty in Canada." He is the author and editor of various books, including the award-winning Heroines and History: Representations of Madeleine de Vercheres and Laura Secord (with Cecilia Morgan). He is currently Canada Research Chair in Canadian Cultural Landscapes at Glendon College, York University, Toronto.

Martin Pâquet is professor of history at Université Laval and holds the Chair for the Development of Research in French Culture in North America (CÉFAN).

Robert Wardhaugh is an associate professor in the Department of History at University of Western Ontario and is the author of Mackenzie King and the Prairie West.

Barry Ferguson is a Professor of History and currently Duff Roblin Professor of Manitoba Government at the University of Manitoba. His work is in political ideas in Canada, particularly liberalism and federalism, as well as provincial politics and government.

PATRICIA ROY is a professor of history at the University of Victoria. She is co-author of The Writing on the Wall.

Ken S. Coates was raised in Whitehorse and has a long-standing interest in northern themes. Titles include Canada’s Colonies, The Sinking of the Princess Sophia, The Modern North, North to Alaska (on the building of the Alaska Highway) and many academic books. He has worked on north-centred television documentaries and served as a consultant to northern governments and organizations. He is currently Professor of History and Dean of Arts, University of Waterloo.

Bill Waiser has been a member of the Department of History at the University of Saskatchewan since 1984. He is the author, co-author, or co-editor of nine books, including Loyal Till Death: Indians and the North-West Rebellion, which was a 1997 finalist for the Governor General's Literary Award for Nonfiction, and Saskatchewan: A New History, which was named the best book in prairie history in 2005 and awarded the Clio Prize by the Canadian Historical Association.

Raymond B. Blake is Professor of History at the University of Regina and formerly Director of the Saskatchewan Institute of Public Policy. His books include Trajectories of Rural Life: New Perspectives on Rural Canada, co-edited with Andrew Nurse (2003), and Canadians at Last: Canada Integrates Newfoundland as a Province (1994 and 2004).

Much more than a basic outline of regional differences during the process of Confederation . . . Reconsidering Confederation provides a very extensive selection of excellently written articles that effectively interrogate the foundational debates of Confederation.
- Alex Gagne, BC Studies

Other titles by Daniel Heidt

Two Years Below the Horn

Other titles by J.R. Miller

A History of Native-Newcomer Relations in Canada, Fourth Edition

by (author) Estate of George Woodcock
edited by J.R. Miller

A History of Native Residential Schools

A Reader on Indian-White Relations in Canada

Other titles by Marcel Martel

A Short History of Vice since 1500

A History of Language and Politics in Canada and Quebec

Essays in Honour of Ramsay Cook

Other titles by Colin Coates

Essays on the Role of Royalty

Other titles by Martin Pâquet

A History of Language and Politics in Canada and Quebec

Other titles by Phillip Buckner

The Atlantic Region to Confederation

The Conquest of Canada in Historical Perspective

The Conquest of Canada in Historical Memory

Canada and the End of Empire

Other titles by Robert Wardhaugh

The Rowell-Sirois Commission and the Remaking of Canadian Federalism

Recollections of a French Pioneer

Manitoba Premiers of the 19th and 20th Centuries

History, Literature and the Writing of the Canadian Prairies

Toward Defining the Prairies

Mackenzie King and the Prairie West

Other titles by Barry Ferguson

The Rowell-Sirois Commission and the Remaking of Canadian Federalism

Manitoba Premiers of the 19th and 20th Centuries

Other titles by Patricia Roy

The Writing on the Wall

Chinese and Japanese Immigration to BC, 1920

Other titles by Ken S. Coates

A History of the Yukon

Dream Factories / What to Consider If You're Considering College

Dream Factories / What to Consider If You're Considering University

Letters from the Canadian West in the 1880s

From Treaty Peoples to Treaty Nation

A Road Map for All Canadians

What To Consider if You're Considering College — Taking Action

What To Consider if You're Considering College — Knowing Your Options

What To Consider if You're Considering College — The Big Picture

Other titles by Bill Waiser

In Search of Almighty Voice

A World We Have Lost

All Hell Can't Stop Us

The On-to-Ottawa Trek and Regina Riot

Indians and the North-West Rebellion

The People Behind the Douglas Years

The Aerial Photography of Howdy McPhail

Other titles by Raymond B. Blake

Where Once They Stood

The Integration of Newfoundland as a Province

From Rights to Needs