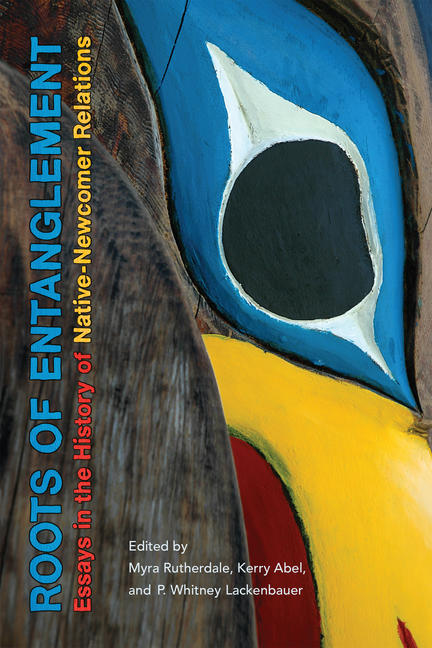 Roots of Entanglement offers an historical exploration of the relationships between Indigenous peoples and European newcomers in the territory that would become Canada. Various engagements between Indigenous peoples and the state are emphasized and questions are raised about the ways in which the past has been perceived and how those perceptions have shaped identity and, in turn, interaction both past and present.

Specific topics such as land, resources, treaties, laws, policies, and cultural politics are explored through a range of perspectives that reflect state-of-the-art research in the field of Indigenous history. Editors Myra Rutherdale, Whitney Lackenbauer, and Kerry Abel have assembled an array of top scholars including luminaries such as Keith Carlson, Bill Waiser, Skip Ray, and Ken Coates. Roots of Entanglement is a direct response to the Truth and Reconciliation Commission’s call for a better appreciation of the complexities of history in the relationship between Indigenous and non-Indigenous peoples in Canada.

Myra Rutherdale (1961-2014) was associate professor of history at York University.

Kerry Abel is Professor of History at Carleton University in Ottawa, Canada. Her publications include Drum Songs: Glimpses of Dene History. She is currently completing an historical study of a sub-region of Northeastern Ontario that includes Timmins, Iroquois Falls, and Matheson.

"Emerging from the field of Canadian Native-newcomer relations, this edited volume focuses on Natives seen as individuals instead of a generalized people, engaging with the historic or contemporary circumstances of colonial invasion."

"Roots of Entanglement: Essays in the History of Native-Newcomer Relations addresses the consequences of historical cultural conquest and assumptions of western superiority throughout. It has everything that talented scholars work so hard their entire lives to achieve, but it falls short when it comes to implementing the actual goal of reconciliation which it promotes. For that, we await some future time and place – wherein we might fundamentally challenge cherished values and ideas and divide up the funding pie to include those who did not receive their fair share in the beginning. As Indigenous people have participated in Canada’s military history, Canadian military historians should draw more directly upon Indigenous perspectives, including their voices in our publications and allowing them to tell their truths."

Other titles by Myra Rutherdale

Aboriginal and Settler Women in Canada's Colonial Past

Caregiving on the Periphery

Historical Perspectives on Nursing and Midwifery in Canada

Women and the White Man's God

Gender and Race in the Canadian Mission Field

Other titles by Kerry Abel

New Perspectives on the North in Canadian History

Aboriginal Resource Use in Canada