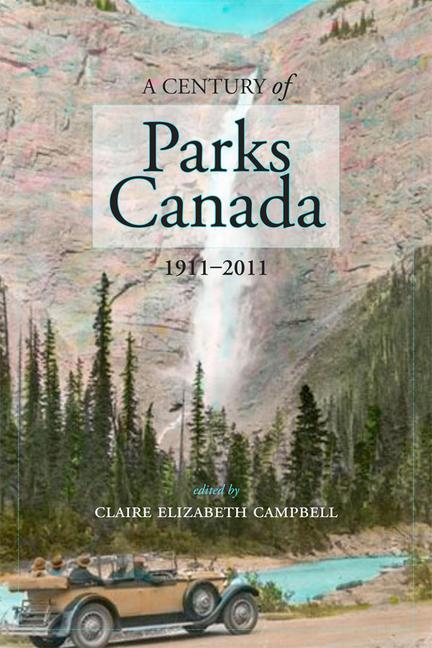 "... a diverse and fascinating array of perspectives on the history of Canada's national parks, illuminating many less well-understood aspects of the evolving place of people in and near these parks." - Stephen Bocking, Professor and Chair, Environmental and Resource Studies Program, Trent University

When Canada created a Dominion Parks Branch in 1911, it became the first country in the world to establish an agency devoted to managing its national parks. Over the past century this agency, now Parks Canada, has been at the centre of important debates about the place of nature in Canadian nationhood and relationships between Canada's diverse ecosystems and its communities. Today, Parks Canada manages over forty parks and reserves totalling over 200,000 square kilometres and featuring a dazzling variety of landscapes, and is recognized as a global leader in the environmental challenges of protected places. Its history is a rich repository of experience, of lessons learned - critical for making informed decisions about how to sustain the environmental and social health of our national parks.

A Century of Parks Canada is published in partnership with NiCHE (Network in Canadian History and Environment; http://niche-canada.org/).

Alan MacEachern grew up on Prince Edward Island and now teaches in the history department at the University of Western Ontario. He is the author of Natural Selections: National Parks in Atlantic Canada, 1935 to 1970.

Claire Campbell is an associate professor in the Department of History and the Coordinator of Canadian Studies at Dalhousie University. She is the author of Shaped by the West Wind: Nature and History in Georgian Bay and co-editor of Groundtruthing: Canada and the Environment, a special issue of the Dalhousie Review.

JOHN SANDLOS teaches history at Memorial University of Newfoundland. With doctoral research on northern wildlife, he has devoted much of his research in the past decade to mining history. Dr. Sandlos is the author of Hunters at the Margin: Native People and Wildlife Conservation in the Northwest Territories, and co-editor of the volume, Mining and Communities in Northern Canada: History, Politics and Memory.

BEN BRADLEY is a Grant Notley Postdoctoral Fellow in the Department of History and Classics at the University of Alberta. His research examines the linkages between mobility, landscape, and mass culture in twentieth-century Canada.

Bill Waiser has been a member of the Department of History at the University of Saskatchewan since 1984. He is the author, co-author, or co-editor of nine books, including Loyal Till Death: Indians and the North-West Rebellion, which was a 1997 finalist for the Governor General's Literary Award for Nonfiction, and Saskatchewan: A New History, which was named the best book in prairie history in 2005 and awarded the Clio Prize by the Canadian Historical Association.

George Colpitts is a professor in the Department of History at the University of Calgary. He has published five books, as well as contributing numerous chapters and journal articles to academic publications. Colpitts is the winner of both the American Society for Ethnohistory's 2012 Robert F. Heizer Prize and the 2010 Frederick C. Luebke Award for outstanding regional scholarship.

Ronald Rudin is a professor in the Department of History and co-director of the Centre for Oral History and Digital Storytelling at Concordia University. His most recent book, Remembering and Forgetting in Acadie, received both the US National Council on Public History Book Award and the Public History Prize of the Canadian Historical Association.

David Neufeld a Parks Canada historian, has worked on Chilkoot Trail National Historic Site for over ten years. Based in Whitehorse, he does research on the Kluane National Park Reserve, the Yukon River, Dawson City and the Klondike goldfields, and the Yukon north slope.

Brad Martin is the Dean of Faculty of Education, Health and Human Development at Capilano University.

I.S. MacLaren teaches at the University of Alberta in the Department of History and Classics and the Department of English and Film Studies. Mapper of Mountains: M.P. Bridgland in the Canadian Rockies, 1902–1930 (2005) is his biography of the Dominion Land Surveyor whose phototopographic work in Jasper in 1915 created the first reliable maps of the area and made possible, eight decades later, the Rocky Mountain Repeat Photography Project.

Lyle Dick is the West Coast Historian with Parks Canada in Vancouver, B.C. He has authored sixty-five publications in the fields of Arctic, Canadian, and American history and historiography. His Muskox Land: Ellesmere Island in the Age of Contact was awarded the Harold Adams Innis Prize by the Canadian Federation for the Humanities and Social Sciences in 2003 for the best English-language book in the social sciences.

Other titles by Alan MacEachern

Other titles by John Sandlos

Other titles by Ben Bradley

A history of Canada’s mines and miners

Mining and Communities in Northern Canada

Hunters at the Margin

Native People and Wildlife Conservation in the Northwest Territories

Other titles by Bill Waiser

British Columbia by the Road

Car Culture and the Making of a Modern Landscape

Other titles by C.J. Taylor

In Search of Almighty Voice

A World We Have Lost

All Hell Can't Stop Us

The On-to-Ottawa Trek and Regina Riot

Indians and the North-West Rebellion

The People Behind the Douglas Years

The Aerial Photography of Howdy McPhail

Other titles by George Colpitts

The Legend of Hiawatha and Tekanawita

Native Stories of Other Worlds

Other titles by Oliver Craig-Dupont

Last of the Buffalo Return to the Wild

Game in the Garden

A Human History of Wildlife in Western Canada to 1940

Other titles by David Neufeld

Removal, Resistance, and Remembrance at a Canadian National Park

Remembering and Forgetting in Acadie

A Historian's Journey through Public Memory

The Celebration of Champlain and Laval in the Streets of Quebec, 1878-1908

The Celebration of Champlain and Laval in the Streets of Quebec, 1878-1908

Other titles by Brad Martin

Heritage Route to the Klondike

Other titles by E. Gwyn Langemann

Other titles by I.S. MacLaren

Tools of the Trade

Other titles by Lyle Dick

The Ladies, the Gwich'in, and the Rat

Travels on the Athabasca, Mackenzie, Rat, Porcupine, and Yukon Rivers in 1926

Other titles by Claire Campbell

The Development of Abernethy District, Saskatchewan, 1880-1920