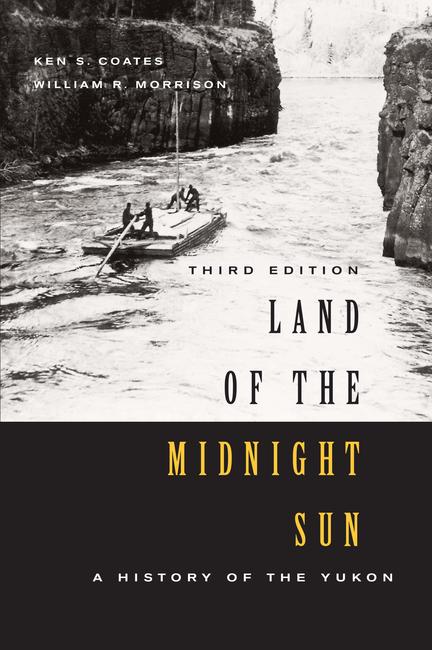 While the Klondike Gold Rush is one of the most widely known events in Canadian history, particularly outside Canada, the rest of the Yukon’s long and diverse history attracts little attention. Important developments such as Herschel Island whaling, pre-1900 fur trading, the post-Second World War resource boom, a lengthy struggle for responsible government, and the emergence of Indigenous political protest remain poorly understood.

Placing well-known historical episodes within the broader sweep of the past, Land of the Midnight Sun gives particular emphasis to the role of First Nations people and the lengthy struggle of Yukoners to find their place within Confederation. This broader story incorporates the introduction of mammoth dredges that scoured the Klondike creeks, the impressive Elsa-Keno Hill silver mines, the impact of residential schools on Aboriginal children, the devastation caused by the sinking of the Princess Sophia, the Yukon’s remarkable contributions to the national First World War effort, and the sweeping transformations associated with the American occupation during the Second World War.

Land of the Midnight Sun has long been the standard source for understanding the history of the territory. This third edition includes a new preface to update readers on developments in the Yukon’s economy, culture, and politics, including Indigenous self-government.

Ken S. Coates was raised in Whitehorse and has a long-standing interest in northern themes. Titles include Canada’s Colonies, The Sinking of the Princess Sophia, The Modern North, North to Alaska (on the building of the Alaska Highway) and many academic books. He has worked on north-centred television documentaries and served as a consultant to northern governments and organizations. He is currently Professor of History and Dean of Arts, University of Waterloo.

William R. Morrison is professor emeritus of history at the University of Northern British Columbia.

Other titles by Ken S. Coates

Dream Factories / What to Consider If You're Considering College

Dream Factories / What to Consider If You're Considering University

Letters from the Canadian West in the 1880s

From Treaty Peoples to Treaty Nation

A Road Map for All Canadians

What to Consider If You're Considering College

New Rules for Education and Employment

What To Consider if You're Considering College — Taking Action

What To Consider if You're Considering College — Knowing Your Options

Other titles by William R. Morrison

The Mounted Police and Canadian Sovereignty in the North, 1894-1925

The Yukon and Northwest Territories