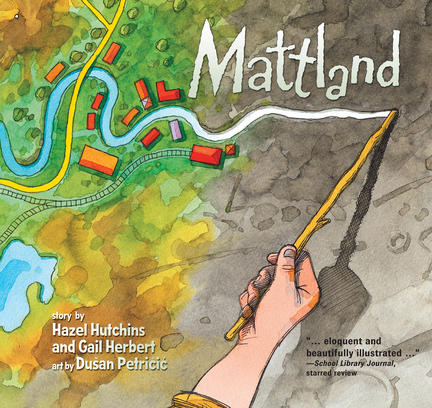 A stirring story about the infectious pleasures of play.

Matt is miserable. The subdivision where he now lives is surrounded by nothing but muddy fields of rocks and sticks. But when Matt ventures out, his imagination kicks in. He draws a muddy, winding line and names it Snake River. A pile of rocks becomes the Dog Tooth Mountains. Just like that, Mattland is born.

Soon a girl shows up with a handful of helpful odds and ends. Piece by piece, she and Matt expand their new world with popsicle-stick bridges and scrap-paper boats. And when a rainstorm finally threatens to wash everything away, all the neighborhood kids appear and help stave off the flood.

Evocative of childhood friendships and with sublime illustrations that brighten in color as the story progresses, Mattland is an inspiring ode to cooperative play.

“A world worth exploring.”

“Has much to offer those who find themselves in a new place, and to creative souls needing inspiration . . . eloquent and beautifully illustrated.”

“The creation of Mattland is a riveting notion that kids will be keen to emulate.”

The Bulletin of the Center for Children’s Books, 09/08

“A rich and multi-layered testament to imagination and the collaborative nature of play. Highly Recommended.”

“Sparse prose and skillful illustrations . . . will give young readers a sense of the experience of displacement.”

“One of those perfect picture books where text and illustrations brilliantly play off each other.”

Matt’s family has moved three times, but this new subdivision is the most depressing environment he has ever lived in. He is surrounded by mud, water and leftover building materials. There is barely a climbing tree or blade of grass in sight. He knows no one. In his frustration, Matt picks up a stick and draws a line in the mud which fills with water. He decides to call the line Snake River. He then connects the line to a puddle which he names Turtle Lake. A jagged row of rocks become Dog Tooth Mountains, and tufts of grass are given the title Buffalo Grasslands. A new landscape emerges out of the surrounding debris: Mattland.

Matt continues to develop Mattland, now with the assistance of an outsider – a silent little girl who brings him popsicle sticks, pine cones, coloured pebbles and bits of tile. A miniature town springs up as a farmhouse, barn, bridges, houses, stores and a factory are added. When a rainstorm threatens to wash this microcosm away, a group of neighbourhood children, who have been watching from a distance, arrive just in time to help save Mattland from destruction – and to become friends with its chief architect.

Hazel Hutchins and Gail Herbert have written a moving tale about the power of a child’s imagination and his ability to transform dreary objects into uncommon attractiveness. Readers will empathize with Matt’s loneliness as he enters a foreign, friendless environment, only to transpose it into something quite wonderful.

Du˘san Petri˘ci´c’s watercolour and ink illustrations capture the transformation of a dismal wasteland into almost magical surroundings. The browns and greys of the opening pages evolve into a cacophony of brightness at the conclusion. Through the inventor’s eyes, Mattland no longer looks like the objects it is made from, but what the young boy imagines the objects to be. Petri˘ci´c illustrates from Matt’s viewpoint, the pictures showing his arms in front of him while he is creating this emerging world. In fact, we only see what Matt looks like, when his face is reflected in the waters of Turtle Lake.

The potential of a child’s imagination and the joy of cooperative play make Mattland a world worth exploring!

Matt has moved three times with his family and he is absolutely miserable because his new home is surrounded by muddy fields full of rocks and sticks. When his imagination kicks in, it leads to his creation of Mattland and making a friend. This story is an inspiring tribute to the power of cooperative play.

Other titles by Gail Herbert