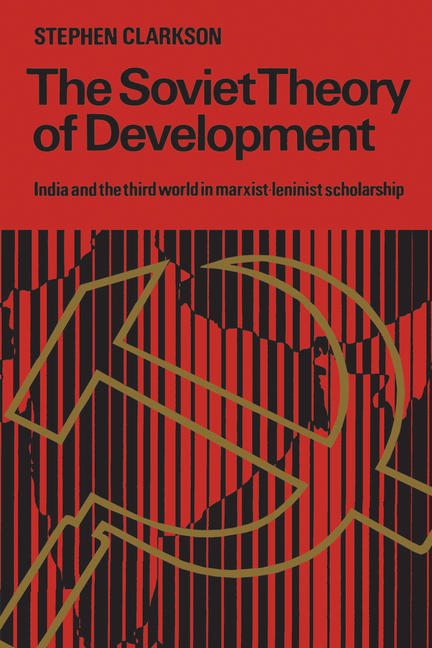 Until now the innumerable and widely distributed Soviet writings on the third world haven been scrutinized for the clues they contain on the Kremlin's aid, trade, and foreign policies, on Soviet strategies for local communist parties, and even on shifts in the Sino-Soviet Relationship. But they have rarely been analysed in their own terms and for what they are – the application of marxist-leninist theory by Soviet scholars to the problems of Asia, Africa, and Latin America. Based on research in Paris, New York, the Soviet Union, and India, this book provides a long needed insight into how Soviet thinkers understand such crucial problems in development as planning in mixed economies, foreign aid from socialist and capitalist donors, agrarian reform, and the class struggle.

A concerned observer of Soviet development theory for some fifteen years, Stephen Clarkson is neither hostile nor uncritical. He argues that western students and third world policy-makers alike have a good deal to learn from marxist-leninist political economy because it presents an integrated approach to understanding the dilemmas of underdevelopment. Although Soviet scholarship benefits from some important theoretical advantages, it also suffers, in Clarkson's view, from severe intellectual handicaps. The book examines the Soviet analysis of third world development as a whole, drawing particularly on the most extensive and sophisticated school of interpretation, the Russian writings on India.

This book makes an important contribution to Soviet and third world studies by offering the reader a guide to the publications on development, a complex and evolving aspect of the Soviet view of the world.

Christina McCall (1935-2005) was a writer of literary non-fiction who worked a socio-political analyst for Maclean's, Saturday Night, Chatelaine, and the Globe and Mail. Grits, her portrait of the Liberal Party, was acclaimed as "one of the most important Canadian books." With her husband, Stephen Clarkson, she co-authored Trudeau and Our Times, the classic two-volume study of Pierre Elliott Trudeau and his impact on Canadian society and politics, the first volume of which won the Governor General's Literary Award in 1990.

Other titles by Stephen Clarkson

How Canada and Mexico Construct US Power

The Globalization of Canadian Law and Governance

My Life as a Dame

The Personal and Political Writings of Christina McCall

Governing the Continent After NAFTA and 9/11

My Life as a Dame /hc

The Personal and Political Writings of Christina McCall

Uncle Sam and Us

Globalization, Neoconservatism, and the Canadian State

Canada and the Reagan Challenge

Crisis in the Canadian-American Relationship