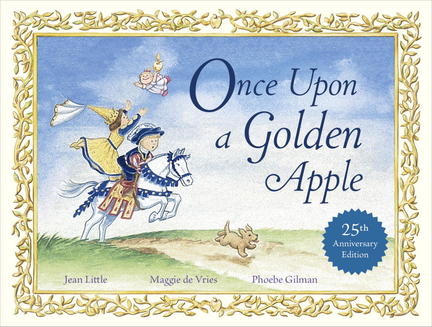 A brand-new board book edition, to celebrate the 25th anniversary of this fractured fairy tale bedtime story

In this hilarious fractured fairy tale romp, everything goes awry. Goldilocks lives with the seven dwarfs, a princess kisses Humpty Dumpty, and she and the prince rescue the Wicked Witch of the West! Can all this mischief get sorted out so that everyone lives happily ever after? Jean Little and Maggie de Vries's playful text and Phoebe Gilman's magical illustrations make this twisted classic a delight to share with new generations of readers.

Pheobe Gilman was the beloved creator of the Jillian Jiggs (Lili Tire-bouchon) series as well as the award-winning Something from Nothing (Un merveilleux petit rien!), The Gypsy Princess, Pirate Pearl, Little Blue Ben, The Balloon Tree (L'arbre aux ballons), and Grandma and the Pirates. She passed away in 2002.

PRAISE FOR ONCE UPON A GOLDEN APPLE
"A Canadian classic. This inventive spoof takes some of our favourite classic fairy tales and turns them upside down, inside out, and back to front, with always hilarious results." -Jeffrey Canton

"Children will thoroughly enjoy this picture-book, which I highly recommend as an ideal choice for both preschool and Primary classrooms." -Canadian Materials
"4/4… Parents, educators, librarians and little readers can all find something within the pages of Once Upon a Golden Apple to inspire and to amuse them… Highly Recommended." --CM Magazine

Other titles by Phoebe Gilman

Grandma and the Pirates

A Treasury of Jillian Jiggs

GRANDMA AND THE PIRATES (RED)

Tell Me A Story: Jillian Jiggs

Tell Me A Story: Jillian Jiggs to the Rescue

Jillian Jiggs to the Rescue

Tell Me a Story: Balloon Tree