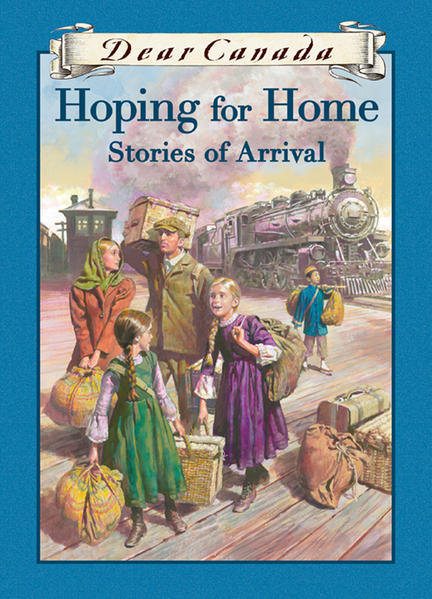 In these eleven original stories, characters bravely face the challenges of settling into a new life.

In this wonderful new short story anthology, eleven of Canada's top children's authors contribute stories of immigration, displacement and change, exploring the frustration and uncertainty those changes can bring. Told in first-person narratives, this collection features a diverse cast of boys and girls, each one living at a different point in Canada's vast landscape and history.

With unforgettable protagonists - such as Miriam, a Warsaw-ghetto survivor, now reunited with her family in Montreal; Wong Joe-on, a young Chinese immigrant who faces racism in a small Saskatchewan town; and Insy, an Ojibwe girl who makes her first trip to a "white" town in Northern Ontario - young readers will be moved by the opportunities and difficulties that these characters face, as each one ponders what it means to be Canadian, and struggles to fit in.

Ruby Slipperjack,
or Ruby Slipperjack-Farrell is a Professor and the Chair of the Department of Indigenous Learning at Lakehead University in Thunder Bay, Ontario. Ruby spent her formative years on her father's trap line on Whitewater Lake. She learned traditional stories and crafts from her family and has retained much of the traditional religion and heritage of her people. Her family later moved to a community along the railway mainline. She went to residential school for several years and finished high school in Thunder Bay.

After graduating from high school Ruby successfully completed a B.A. (History) in 1988; a B.Ed in 1989; and a Master of Education in 1993. In 2005 she completed a Doctoral program at the University of Western Ontario.

Ruby is a member of the Eabametoong First Nation and speaks fluent Ojibway. She uses her maiden name "Slipperjack" when she writes, in honour of her parents and ancestors for the cultural knowledge and teachings that inform her writing. Ruby has retained much of the traditional religion and heritage of her people, all of which inform her writing. Her work discusses traditional religious and social customs of the Ojibwe in northern Ontario, as well as the incursion of modernity on their culture. Ruby is also an accomplished visual artist and a certified First Nations hunter.

Ruby is the mother of three daughters and currently lives in Thunder Bay with her husband and their two shelties.

In 1968 Irene N. Watts came to Canada from Britain, where she had arrived thirty years earlier from Germany, via Kindertransport. She is a writer/playwright, theatre director, and educator. Her plays for young audiences have been widely produced. Awards include a Vancouver Theatre Alliance Jessie Richardson for Goodbye Marianne (Scirocco Drama and Anchorage Press, U.S.); the Geoffrey Bilson Award for Historical Fiction for Young People; the Isaac Frischwasser Memorial Award (Helen and Stan Vine Canadian Jewish Book Awards, 1999 and 2001); the Government of Alberta Achievement Award for Outstanding Service to Drama. Irene is a Lifetime Member of the Playwrights Guild of Canada. Recent publications include Tapestry of Hope: Holocaust Writing for Young People, compiled with Lillian Boraks-Nemetz (Tundra Books).

Brian Doyle is a four-time winner of the Canadian Library Association's Book of the Year for Children Award. His American honors include being selected for the Horn Book's Fanfare List, the ABA "Pick of the Lists" and the New York Public Library's Best Books for the Teen Age. He has also won the NSK Neustadt Prize, the Phoenix Honor Award, and he has been named a finalist for the Hans Christian Anderson Award. He lives in Chelsea, Quebec.

The theme of arrival — whether through immigration, displacement, change or new experiences — is explored by boys and girls who bravely faced the challenges of settling into a new life. In these 11 original stories, set at various points in Canada’s vast landscape and history, we hear from some of Canada’s most renowned authors.

Looking At the Moon

Other titles by Ruby Slipperjack

Dear Canada: These Are My Words

Other titles by Irene N. Watts

A Story of Growing Up in Nazi Germany

When the Bough Breaks

Other titles by Brian Doyle

The Brian Doyle Up to Low Bundle

You Can Pick Me Up at Peggy's Cove