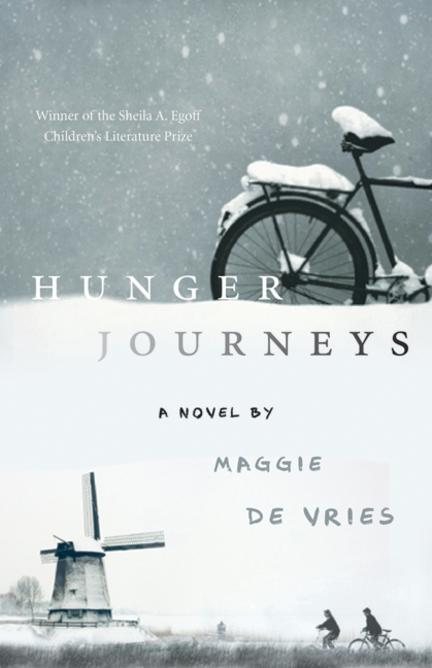 "First, that is a lie. You are not trying to take a train to Germany. Second, your papers are false. Do you think you can trump up false papers and just walk onto one of our trains?" (Hunger Journeys)

It’s World War Two in Amsterdam. Lena leaves her starving family to travel by train with her friend Sofie to Almelo, a town close to the German border, in search of food. It’s a risky plan. The girls have false papers and are quickly pulled off the train by German soldiers. Only by fluke do they get back on again—with the help of Albert, one of the soldiers. After Lena discovers that the train had also been used to transport Jews to concentration camps, she fears her new friendship with the well-meaning Albert may lead her into more danger. Sofie, too, befriends a soldier, a relationship that quickly turns serious and has unfortunate consequences for both girls.

It’s WWII in Amsterdam, and families are starving. In teenaged Lena’s family, tensions run high as she struggles to find food enough for everybody — including her pregnant mother. With no food left in the city, Lena leaves her family and, equipped with false papers, travels by train with her friend Sofie to Almelo, a city near the German border. Things quickly go wrong, and the girls must rely on two German soldiers to protect them. Sofie befriends one of the soldiers, and as their relationship grows closer, it will have unforeseen consequences for both girls.

Author Maggie de Vries’ young adult debut is a powerful work of historical fiction. Inspired by stories told to her by her motherin- law, de Vries offers readers education into an aspect of WWII in vivid detail.

Lena is a typical teenager in many ways, and has a naïve picture of the world. The complexities of the war are lost on her. She sees everything in black and white, good and evil, but she is still thoughtful. She is also a girl caught between childhood and adulthood, and resents the added responsibilities being placed upon her by her family.

Sofie by contrast is impulsive, flighty and daring, and does as she pleases without thought of consequence. As misguided as she often is, she forces Lena away from the sidelines and helps her to transform from passive to active.

This is not an easy book to read, but it’s well worth the effort. Themes of friendship, loyalty, and courage are prevalent, making this an excellent book for classroom use or for fans of great historical fiction.

Teenaged Lena and her friend Sofie leave their starving families to travel by train to Almelo in search of food. When the girls’ false papers are discovered by German soldiers, they are pulled off the train. With the help of Albert, a German soldier, they board the train once again, but will making this soldier’s acquaintance lead Lena and Sofie into more trouble? And where will Sofie’s relationship with her soldier boyfriend lead?