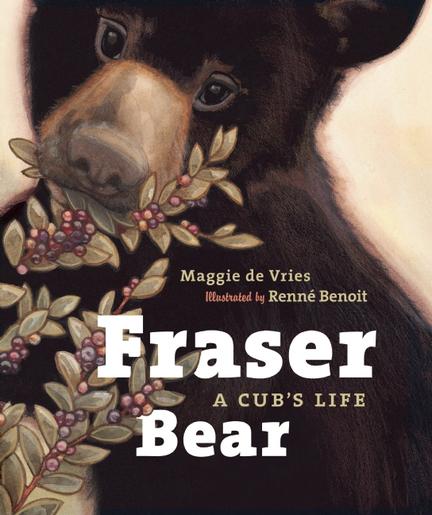 A beautifully illustrated nature story of a bear cub's life in the Pacific Northwest, from a multi-award-winning team, Fraser Bear is the exciting and moving story of a black bear cub's dangers and adventures in his first two years, uniting the intertwined cycles of bear and fish. A map, facts about bears and salmon, and a letter from the Pacific Salmon Foundation complete this true-to-life nature story for young readers.

This book is based on the top-selling plush toy created by Pacific Salmon Foundation and Rocky Mountaineer Vacations.

This story highlights the relationship between bear and salmon. One January, Fraser Bear is born deep in a den near the beginning of the Fraser River. At the same time, the Chinook salmon begin the long journey home from sea to spawn. Month by month, the reader watches the adorable cub grow, explore and learn. Meanwhile, the salmon continue their journey home, facing challenges such as fishing nets and fish ladders. Finally, the salmon reach the spawning grounds and the baby bear learns about a tasty new food. Soon the bears hibernate, the new salmon are born, and the cycle starts again. Benoit’s illustrations are authentically detailed. Includes interesting bear facts, a coloured map and glossary.

De Vries and Benoit also collaborated on Tale of a Great White Fish.

Author / illustrator duo Maggie de Vries and Renné Benoit return to the waters of British Columbia’s Fraser River, the setting of their award-winning book, Tale of a Great White Fish: A Sturgeon Story, to chronicle a story far shorter in time span but no less epic.

In a cozy den high in the Canadian Rocky Mountains, two newborn bears hungrily nuzzle against their mother while, far out at sea, thousands of chinook salmon begin their journey to the headwaters of the Fraser River and their birthplace. So begins the story of Fraser Bear: A Cub’s Life — a sweeping story of a black bear family and its critical connection to the annual Pacific salmon cycle.

Written in large, bold text with plenty of white space, and richly packed with information, this is a realistic environmental story that is both engaging and absorbing. Children will be delighted and awed to follow along as Fraser feels snow for the first time, survives a bear attack and catches his first salmon. A glossary and additional information about black bears and chinook salmon, including a map of the salmon route, extend this book’s classroom use.

The intersection of humans and nature is thoughtfully presented in both the text and Benoit’s evocative watercolour illustrations through interactions with conservationists, fishermen and distant trains. This connection is particularly fitting given the book’s origin. It is based on a popular plush toy created by the Pacific Salmon Foundation and Rocky Mountain vacations with proceeds funding salmon conservation projects.