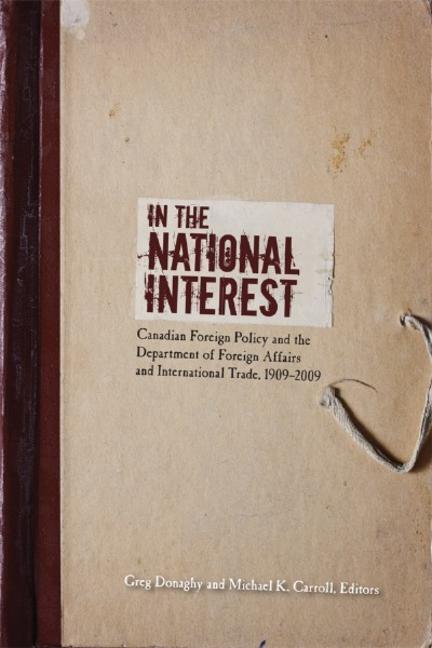 Canada's role as world power and its sense of itself in the global landscape has been largely shaped and defined over the past 100 years by the changing policies and personalities in the Department of Foreign Affairs and International Trade (DFAIT).

This engaging and provocative book brings together fifteen of the country's leading historians and political scientists to discuss a century of Canada's national interests and DFAIT's role in defining and pursuing them. Accomplished and influential analysts such as Jack Granatstein, Norman Hillmer, and Nelson Michaud, are joined by rising stars like Whitney Lackenbauer, Adam Chapnick, and Tammy Nemeth in commenting on the history and future implications of Canada's foreign policy.

In the National Interest gives fresh insight into the Canada First concept in the 1920s, the North American security issues in the 1930s, Canada's vision for the United Nations, early security warnings in the Arctic, the rise of the international francophone community, conflicting continental visions over energy, and Canada/U.S. policy discussions. The impact of politicians and senior bureaucrats such as O.D. Skelton, Lester B. Pearson, Marcel Cadieux, Jules Leger, Pierre Trudeau and Brian Mulroney are set against issues such as national defence, popular opinion, human rights, and energy production.

Michael K. Carroll is an assistant professor of History at Grant MacEwan University. He is also the author of Pearson's Peacekeepers: Canada and the United Nations Emergency Force, 1956-1967.

Norman Hillmer is professor of history and international affairs at Carleton University and is a former senior historian at the Department of National Defence. Granatstein and Hillmer have collaborated on five books, including "First Drafts: Eyewitness Accounts from Our Past" and the national bestseller "Prime Ministers: Ranking Canadaâ€™s Leaders".

Galen Roger Perras is an Associate Professor of History at the University of Ottawa. He holds an MA in War Studies from the Royal Military College of Canada and a PhD in History from the University of Waterloo. Specializing in Canadian-American relations and North American military history, he has more than 40 academic publications located in academic journals and edited monographs. His major publications include: Franklin Roosevelt and the Origins of the Canadian-American Security Alliance, 1933–1945: Necessary But Not Necessary Enough (Praeger 1998); and Stepping Stones to Nowhere: The Aleutian Islands, Alaska, and American Military Strategy, 1867–1945 (University of British Columbia Press & Naval Institute Press, 2003). The University of Ottawa selected him as an Educator of the Year in 2008–09.

J. L. GRANATSTEIN is the author of over 60 books, including the bestsellersWho Killed The Canadian Military? and Whose War Is It?, along withYankee Go Home?, Victory 1945 and The Generals, which won the J. W. Dafoe Prize and the UBC Medal for Canadian Biography. A distinguished research professor of history emeritus at York University, he was a member of the RMC Board of Governors and is chair of the Advisory Council of the Canadian Defence and Foreign Affairs Institute. He lives in Toronto. Visit Granatstein atwww.whosewar.ca.

Michael Hart is Simon Reisman Chair in Trade Policy, Norman Paterson School of International Affairs, Carleton University. A former trade official in Canada's Department of Foreign Affairs and International Trade, he was the founding director of Carleton's Centre for Trade Policy and Law and is the author of numerous books and articles on international trade issues.

Elizabeth Riddell-Dixon has spent three decades researching and writing about law of the sea policy. She is a Distinguished Senior Fellow with the Bill Graham Centre for Contemporary International History, University of Toronto, and Professor Emerita in the Department of Political Science at Western University.

Other titles by Michael K. Carroll

Other titles by Norman Hillmer

The United Kingdom, the United States, Canada, and the Trade Agreements of 1938

Eyewitness Accounts from Our Past

Other titles by Galen Roger Perras

Other titles by J.L. Granatstein

A Nation Shaped by War

Waging War and Keeping the Peace

Manpower in the Canadian Expeditionary Force, 1914-1918

The Weight of Command

Why Canada Was Unprepared for the Second World War

Other titles by Adam Chapnick

A Small Power on a Large Stage

Canada and the Founding of the United Nations

Other titles by Peter Kikkert

The Canadian Forces and Arctic Sovereignty

Other titles by Robin S. Gendron

The Political Economy of the Global Bauxite Industry

Towards a Francophone Community

Other titles by Michael Hart

Inside the Canada-US Free-Trade Negotiations

From Pride to Influence

Other titles by Nelson Michaud

Colombia and the United States

Other titles by Elizabeth Riddell-Dixon

Canada and the Beijing Conference on Women