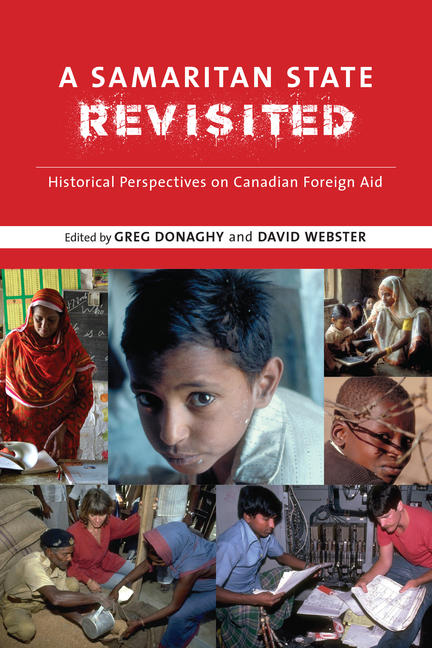 A Samaritan State Revisited brings together a refreshing group of emerging and leading scholars to reflect on the history of Canada’s overseas development aid. Addressing the broad ideological and institutional origins of Canada’s official development assistance in the 1950s and specific themes in its evolution and professionalization after 1960, this collection is the first to explore Canada’s history with foreign aid with this level of interrogative detail.

Extending from the 1950s to the present and covering Canadian aid to all regions of the Global South, from South and Southeast Asia to Latin America and Africa, these essays embrace a variety of approaches and methodologies ranging from traditional, archival-based research to textual and image analysis, oral history, and administrative studies. A Samaritan State Revisited weaves together a unique synthesis of governmental and non-governmental perspectives, providing a clear and readily accessible explanation of the forces that have shaped Canadian foreign aid policy.

David Webster teaches international and Asian history topics with a focus on the 20th century at Bishop’s University. He is the author of Fire and the Full Moon: Canada and Indonesia in a Decolonizing World. Previously he was collection editor of East Timor: Testimony (Between the Lines, 2004). His research focuses on trans-Pacific interactions between Canada and Asia, and on the diplomacy of independence movements in Asia.

David R. Black is Lester B. Pearson Professor of International Development Studies at Dalhousie University in Halifax, Canada. His research has focused on Canada’s role in sub-Saharan Africa, South Africa’s place within the continent, and sport in world politics. He is co-editor of A Decade of Human Security (2006) and The International Politics of Mass Atrocities: The Case of Darfur (2008).

Steven Brown has been a student of Northwest Coast Native cultures since the mid-1960s and is a former curator at the Seattle Art Museum. He lives in Sequim, Washington.

LAURA M. MAC DONALD was born and raised in Halifax, Nova Scotia, and grew up listening to stories of the 1917 explosion. A former television producer, radio commentator and magazine editor, she lives in New York City. Visit her online at www.laurammacdonald.com.

Dominique Marshall is a professor in the Department of History at Carleton University. She is widely published in the areas of social policy, the history of the family, and the international history of childrens rights and humanitarian aid. In 1999, Aux origines sociales de l´Etat-providence received honourable mention for the Sir John A. Macdonald Prize for best book in Canadian history and won the 199899 Prix Jean-Charles-Falardeau for the best French-language book in the social sciences.

Nicola Doone Danby teaches translation at McGill University, English at Collège Brébeuf, and is a freelance translator, editor, and writer. She pioneered the ACP Salon du Livre Bilingual Rights Program, and is an active member of the Literary Translators Association of Canada.

Asa McKercher is assistant professor of history at the Royal Military College of Canada.

A Samaritan State Revisited will both act as a signpost, marking what has been accomplished (historiographically) so far, and serve as a valuable reference point as the task of developing the history of Canadian aid—in all its manifestations and complexity—continues.

Offers a fascinating window into one aspect of Canadian political history, while simultaneously opening up broader lines of inquiry in contemporary international relations.

Other titles by David Webster

Flowers in the Wall

Truth and Reconciliation in Timor-Leste, Indonesia, and Melanesia

Fire and the Full Moon

Canada and Indonesia in a Decolonizing World

Other titles by Stephen Brown

The Edinburgh History of the Book in Scotland, Volume 2: Enlightenment and Expansion 1707-1800

The Remarkable Journey of the Dundas Collection

Other titles by Jill Campbell-Miller

Other titles by Laura MacDonald

Canada's Past and Future in Latin America

Regional Integration in an Era of Economic Turbulence

Curse Of The Narrows

Other titles by Dominique Marshall

The Social Origins of the Welfare State

Other titles by Asa McKercher

The New Study of Canada and the World

Canadian-American Relations in the Kennedy Era

Other titles by Ryan Touhey