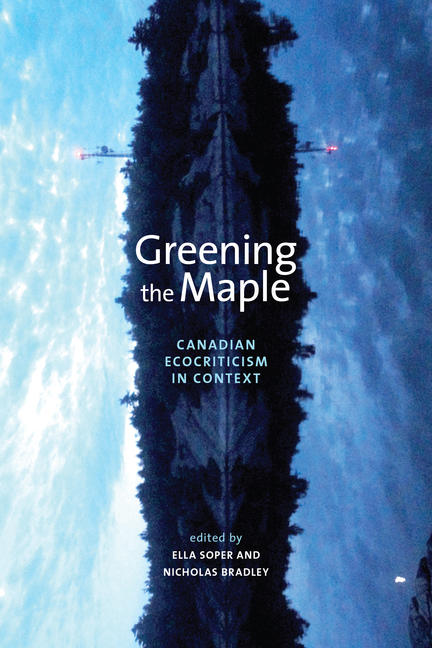 Ecocriticism can be described in very general terms as the investigation of the many ways in which culture and the environment are interrelated and conceptualized. Ecocriticism aspires to understand and often to celebrate the natural world, yet it does so indirectly by focusing primarily on written texts. Hailed as one of the most timely and provocative developments in literary and cultural studies of recent decades, it has also been greeted with bewilderment or scepticism by those for whom its aims and methods are unclear. This book seeks to bring into view the development of ecocriticism in the context of Canadian literary studies. Selections include work by Margaret Atwood, Northrop Frye, Sherrill Grace, and Rosemary Sullivan.

Nicholas Bradley is an associate professor in the Department of English at the University of Victoria. He is the editor of We Go Far Back in Time: The Letters of Earle Birney and Al Purdy, 1947–1987 (2014) and An Echo in the Mountains: Al Purdy after a Century (2020), and the author of Rain Shadow (2018). He is also an associate editor of the journal Canadian Literature.

Heather Murray is Associate Professor in the Department of English at the University of Toronto.

D.M.R. Bentley is a professor of English at the University of Western Ontario. He is the editor of Canadian Poetry: Studies, Documents, Reviews and the author of numerous books and articles on Canadian and Victorian poetry.

Laurie Ricou is a Professor of English at the University of British Columbia. He is a former president of the Western Literature Association, and currently edits Canadian Literature. His previous publications include Vertical Man/Horizontal World: Man and Landscape in Canadian Prairie Fiction (0-7748-0023-2), A Field Guide to “A Guide to Dungeness Spit” (0-88982-165-8), and The Arbutus/Madrone Files: Reading the Pacific Northwest (1-896300-43-X). Ricou currently lives in Vancouver, BC.

Linda Hutcheon holds the rank of University Professor of English and Comparative Literature at the University of Toronto. A specialist in postmodernist culture and in critical theory, on which she has published nine books, she has also worked collaboratively in large projects involving hundreds of scholars.

Linda M. Morra is an associate professor in the Department of English at Bishop’s University and the current president of the Quebec Writers’ Federation. She edited the collected letters of Emily Carr and Ira Dilworth published with the University of Toronto Press (2006), and edited and annotated Jane Rule’s Taking My Life (2011).

Stephanie Posthumus is an assistant professor in the Department of Languages, Literatures, and Cultures at McGill University.

Rita Wong teaches in Critical + Cultural Studies at the Emily Carr University of Art + Design, Vancouver, BC, Canada, where she has developed a humanities course focused on water, with the support of a fellowship from the Center for Contemplative Mind in Society. She is currently researching the poetics of water, supported by a grant from the Social Sciences and Humanities Research Council of Canada: http://downstream.ecuad.ca/ .

Her poems have appeared in anthologies such as Prismatic Publics: Innovative Canadian Women's Poetry and Poetics, Regreen: New Canadian Ecological Poetry, Visions of British Columbia (published for an exhibition at the Vancouver Art Gallery), and Making a Difference: Canadian Multicultural Literature. She has a passion for daylighting buried urban streams and for watershed literacy. Wong can be found on twitter at https://twitter.com/rrrwong.

Misao Dean is a professor in the Department of English at the University of Victoria.

ADAM DICKINSON was born in Bracebridge, Ontario. He is the author of four books of poetry, including Anatomic(2018), a finalist for the Raymond Souster Award and winner of the Alanna Bondar Memorial Book Prize from the Association for Literature, Environment, and Culture in Canada. His work has been nominated for the Governor General’s Award for Poetry and twice for the Trillium Book Award for Poetry. He was also a finalist for the Canadian Broadcasting Corporation (CBC) Poetry Prize and the K. M. Hunter Artist Award in Literature. His work has been translated into Chinese, Dutch, French, German, Norwegian, and Polish. He has been featured at international literary festivals such as Poetry International in Rotterdam, Netherlands, and the Oslo International Poetry Festival in Norway. He was also part of the VERSschmuggel poetry translation project hosted in conjunction with Poesiefestival Berlin, Germany. He is a Professor of English and Creative Writing at Brock University in St. Catharines, Ontario.

Travis V. Mason teaches English and Canadian studies at Dalhousie and Mount St. Vincent Universities. After completing his Ph.D. at the University of British Columbia, he studied ecopoetry in South Africa as a Mellon Postdoctoral Fellow before moving to Halifax to study Canadian literary responses to science with a Killam Postdoctoral Fellowship. His articles have appeared in books and journals, including Canadian Literature, Studies in Canadian Literature, The Dalhousie Review, Kunapipi, and Mosaic.

If a good anthology is one that both lays the foundation and opens the door, Greening the Maple fits the bill. This landmark volume demonstrates that ecocriticism in Canada is well established and is also ripe for questioning and extending.

A fascinating overview of Canadian critical engagement with nature.

Greening the Maple is a must read for those interested in literature and the environment. The collection demonstrates the uniqueness and worth of Canadian ecocriticism and its various origins and trajectories.

Other titles by Nicholas Bradley

The Poetry of Rita Wong

An Echo in the Mountains

Al Purdy after a Century

Canada and the Idea of North

Other titles by Heather Murray

Not in This Family

Gays and the Meaning of Kinship in Postwar North America

The Literary Societies of Nineteenth-Century Ontario

Other titles by D.M.R. Bentley

Essays on the Ecologies and Mythologies of Canadian Poetry 1690-1990

Other titles by Laurie Ricou

Listening for the Northwest Understory

Field Guide To A Guide To Dungeness Spit

Other titles by Linda Hutcheon

Comparative Literature for the New Century

The Postwar Novel in Canada

A Dialogue on Theory

Leonard Cohen and His Works

Other titles by Jenny Kerber

Other titles by Catriona Sandilands

Women and the Canadian Environment

Other titles by Linda Morra

Other titles by Stephanie Posthumus

Other titles by Rita Wong

The Poetry of Rita Wong

Other titles by Misao Dean

The Canoe in Discourses of English-Canadian Nationalism

Other titles by Pamela Banting

Other titles by Adam Dickinson

Other titles by Travis V. Mason

Other titles by Nelson Gray

Talker's Town and The Girl Who Swam Forever