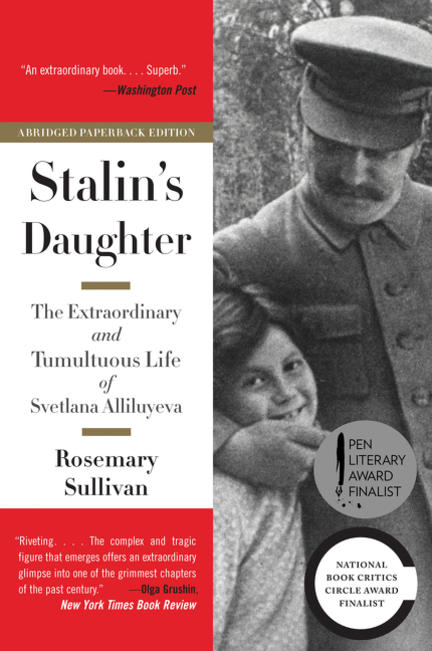 Winner of the Plutarch Award for Best Biography

The award-winning author of Villa Air-Bel returns with a painstakingly researched, revelatory biography of Svetlana Stalin, a woman fated to live her life in the shadow of one of history’s most monstrous dictators—her father, Josef Stalin.

Born in the early years of the Soviet Union, Svetlana Stalin spent her youth inside the walls of the Kremlin. Communist Party privilege protected her from the mass starvation and purges that haunted Russia, but she did not escape tragedy—the loss of everyone she loved, including her mother, two brothers, aunts and uncles, and a lover twice her age, deliberately exiled to Siberia by her father.

As she gradually learned about the extent of her father’s brutality after his death, Svetlana could no longer keep quiet and in 1967 shocked the world by defecting to the United States—leaving her two children behind. But although she was never a part of her father’s regime, she could not escape his legacy. Her life in America was fractured; she moved frequently, married disastrously, shunned other Russian exiles, and ultimately died in poverty in Wisconsin.

With access to KGB, CIA, and Soviet government archives, as well as the close cooperation of Svetlana’s daughter, Rosemary Sullivan pieces together Svetlana’s incredible life in a masterful account of unprecedented intimacy. Epic in scope, it’s a revolutionary biography of a woman doomed to be a political prisoner of her father’s name. Sullivan explores a complicated character in her broader context without ever losing sight of her powerfully human story, in the process opening a closed, brutal world that continues to fascinate us.

““With a gentle literary touch, [Sullivan] lets readers follow Alliluyeva as she wanders the U.S. and U.K….”

“Insightful and thoroughly researched.… This excellent and engrossing biography is suitable for anyone interested in Russian history or in Svetlana’s struggle to make a difference in a world that never could separate her from her.”

“[An] extraordinary book…. Rosemary Sullivan possesses the sensitivity necessary to unlock a beguiling and complex character worthy of admiration, not ridicule…. Superb.”

“Stalin’s only daughter, lived an almost impossible life at the edges of 20th-century history…. Sullivan masterfully employs interviews, Alliluyeva’s own letters, and the contents of CIA, KGB, and Soviet archives to stitch together a coherent narrative of her fractured life… A head-spinning journey as Alliluyeva attempts to escape her father’s shadow without ever fully comprehending the man who cast it.”

“Although other authors have provided more systematic analysis of the substance and mechanics of Stalin’s terror, Rosemary Sullivan…provides one of the more emotionally draining illustrations of Stalin’s evil.… As Sullivan makes clear, Stalin’s daughter led a full and dramatically tumultuous life.”

“Compassionate and compelling, Sullivan sensitively delivers the intimate, tragic life story of a woman who was Stalin’s only daughter in all its strangeness…. This is not a political story but a quest for love in the heart of darkness.”

“A compelling biography…Sullivan tells [Alliluyeva’s] story with sympathy and verve.”

“Sullivan tells Alliluyeva’s story with sympathy and sharp psychological insight.… [It] soars…. It is to Sullivan’s credit that she makes the Homeric wanderings of Svetlana Alliluyeva—who died, almost penniless, in 2011—not only comprehensible, but also unforgettably moving.”

“Revealing…. Sullivan’s biography takes us beyond…obvious truth and helps us understand, through Svetlana’s stormy history, the nature of regimes that are as brutal as Stalin’s was.”

“Stalin’s only daughter, lived an almost impossible life at the edges of 20th-century history…. Sullivan masterfully employs interviews, Alliluyeva’s own letters, and the contents of CIA, KGB, and Soviet archives to stitch together a coherent narrative of her fractured life.”

“In her poignant biography, Canadian writer Rosemary Sullivan tells Alliluyeva’s story with sympathy and sharp psychological insight.…Stalin’s Daughter soars on details culled from dozens of interviews and impressive archival research from KGB and CIA files. The glimpses into the Stalin household are invariably fascinating, and the subsequent wanderings of Svetlana as she searches for inner peace take on an epic quality. It is to Sullivan’s credit that she makes the Homeric wanderings of Svetlana Alliluyeva—who died, almost penniless, in 2011—not only comprehensible, but also unforgettably moving.”

“If it weren’t for the pages of scrupulous footnotes and the many interviews Rosemary Sullivan pursued you would be convinced that this was fiction. But it’s a true story, thrillingly told in this fast-paced, fascinating biography.”

“[A] measured, informative biography...fascinating...an admiring portrait of an amazingly adaptable person facing all but insurmountable odds…[and who] refused to let her lineage seal her fate.”

“Sullivan draws on previously secret documents and interviews with Svetlana’s American daughter, her friends, and the CIA “handler” who escorted her to the U.S. for riveting accounts of her complicated life.”

“Compelling…. Sullivan takes us confidently through an eventful life…. It’s to Ms. Sullivan’s credit that, at least in these pages, Alliluyeva herself is proved…a fascinating person not simply because of her name but because she was a willful, intelligent, passionate woman who resisted being gawked at as a freak of history: the monster’s pretty daughter.”

“A principal virtue of…Sullivan’s empathetic Stalin’s Daughter is the vivid sense it offers of Alliluyeva…. Sullivan does a nice job of conveying her subject’s point of view without accepting it as the last word.”

“Sullivan does an admirable job of researching, organizing and contextualizing the events of Alliluyeva’s bewildering life.… It is an excellent book, and deserves a wide readership.”

“Stalin’s Daughter is a poignant look at the struggles of a dictator’s offspring.”

“Riveting…. Throughout, Sullivan treats the wealth of facts she has uncovered with a sensitive, compassionate touch…. Sullivan tells a nuanced story that, while invariably sympathetic, nonetheless allows readers the freedom of their own interpretations.”

“A child of the Kremlin who as an adult defected to the United States, Svetlana led a strange and often sad life; Sullivan brings deep scholarship and sympathy to her story.”