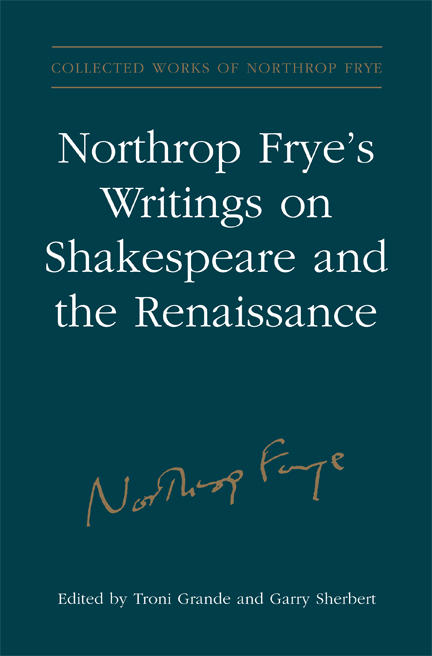 This collection of Northrop Frye's writings on Shakespeare and the Renaissance spans forty years of his career as a university teacher, public critic, and major theorist of literature and its cultural functions. Extensive annotations and an in-depth critical introduction demonstrate Frye's wide-ranging knowledge of Renaissance culture, the pivotal place of the Renaissance in his oeuvre, his impact on Renaissance criticism and on the Stratford Festival, and his continuing importance as a literary theorist.

This volume brings together Frye's extensive writings on Shakespeare and other Renaissance writers (excluding Milton, who is featured in other volumes), and includes major articles, introductions, public lectures, and four previously published books on Shakespeare. Frye's insightful analyses offer not just a formidable knowledge of Renaissance culture but also a transformative experience, moving the reader imaginatively towards an experience of created reality.

Troni Y. Grande is an associate professor in the Department of English at the University of Regina.

Garry Sherbert is an associate professor in the Department of English at the University of Regina. He is co-editor of two volumes forthcoming in the The Collected Works of Northrop Frye: Shakespeare and the Renaissance.

Annie Gérin is a curator and assistant professor of art history and art theory in the Department of Visual Arts at the University of Ottawa. She has published articles on public art in journals such as Espace, BlackFlash, and Fuse.

Sheila Petty is dean of the Faculty of Fine Arts and a professor of media studies at the University of Regina. She has written extensively on issues of cultural representation, identity, and nation in African and African diasporic cinema, television and new technologies.

Other titles by Troni Y. Grande

Other titles by Garry Sherbert