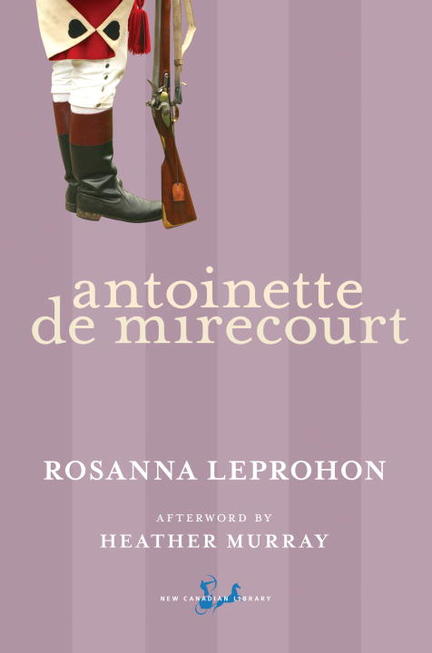 To the intense distress of her family, Antoinette de Mirecourt falls in love with an English officer, and the love affair becomes an inescapable mirror of the tensions between French and English as they struggle towards amicable coexistence. Set primarily in Montreal, the novel provides an unmatched portrait of Quebec in the late eighteenth century.

First published in 1864, Antoinette de Mirecourt is an evocative romance of manners and morals. The New Canadian Library edition is an unabridged reprint of the complete original text.

Heather Murray is Associate Professor in the Department of English at the University of Toronto.


The feeble sun of November, that most unpleasant month in our Canadian year, was streaming down on the narrow streets and irregular buildings of Montreal, such as it existed in the year 176–, some short time after the royal standard of England had replaced the fleur-de-lys of France.

Reflecting back the red sunlight in the countless small panes of its narrow casements, stood a large and substantial-looking stone house, situated towards the east extremity of Notre Dame street, then the aristocratic quarter of the city. Without going through the ceremony of raising the ponderous knocker, we will pass through the hall-door, with its arched fan-light overhead, and, entering the mansion, take a short survey of its interior and inmates. Despite the lowness of the ceilings, so justly incompatible with our modern ideas of elegance, or even comfort, – despite the rough wood-carving and tarnished gilding encircling the doors and windows, and the quaint, useless wooden architraves running round the walls of the different apartments, there is a stamp of unmistakable wealth and refinement pervading the abode.

Glimpses of fine old paintings, costly inlaid cabinets, antique vases, and other objects of art, revealed through the half-open doors, confirm this impression, even before we are told that the mansion is inhabited by Monsieur D’Aulnay, one of the most distinguished among the few families of the old French noblesse, who continued to dwell in any of the principal cities after their country had passed under a foreign rule.

The master of the house, a plain-featured but gentlemanly-looking man, was seated, at the moment in which we introduce him to the reader, in his large and well-lighted library. The three sides of this, his favorite apartment, were covered, from ceiling to floor, with compactly-filled shelves, whilst a few well-executed busts or good portraits of literary men were the only ornaments of any sort which the room contained. The serviceable, dark bindings of the volumes, innocent of gilding or gaudy lettering, betrayed they were valued by their owner more for their contents than their appearance; and in his earnest, unostentatious love of literature, might have been found the key to the tranquil placidity of character which distinguished him under circumstances which would have often severely tried the patience of less philosophic men. When hosts of his personal friends and relatives urged him, after the capitulation of Montreal, to do as they were doing, and return to la vieille France, or at least seek the solitude of his wealthy seigneurie in the country, and bury himself there for the remainder of his days, he looked round his library, sighed, and shook his head. In vain some fiery spirits indignantly asked him how he could brook the arrogance of the proud conquerors who had landed on their shores? how he could endure to meet, wherever eye or footstep turned, the scarlet uniforms of theepauletted heroes who now governed his native land in King George’s name. To their indignant remonstrances he sadly but calmly rejoined he should not see much of them, for he intended establishing himself henceforth permanently in his beloved library, and going abroad as little as possible. When farther pressed on the subject, he referred his friendly persecutors to Madame D’Aulnay; and as it was well known that that fair lady had on several occasions expressed her fixed determination to never bury herself during life in the country, though she had no objections to their burying her there after death, he was generally, at this stage of the argument, left in peace.

As we have said, Mr. D’Aulnay was seated in his library, absorbed in the perusal of some abstruse and learned work, no political regrets or projects disturbing for the moment his intellectual enjoyment, when the door of the apartment opened, and an elegant looking woman, on the shady side of Balzac’s admired feminine age of thirty, and dressed with the most exquisite taste and care, entered.

“Mr. D’Aulnay,” she exclaimed, laying a dainty, heavily-ringed hand on his shoulder.

“Well, what is it, Lucille?” and he half closed his book with a regretful though not impatient look.

“I have come to tell you that Antoinette has just arrived.”

“Yes, you moon-struck man,” and the little hand inflicted a playful tap on his cheek. “My cousin Antoinette, whom I have been vainly begging of that cross uncle of mine, for the last six months; and who has been at last granted a chance of seeing a little of life under my auspices.”

“Do you mean that rosy, good-humored little girl I saw two summers ago, in the country, at Mr. De Mirecourt’s?”

“The same, but instead of a little girl, she is now a young lady, and a wealthy heiress besides. Uncle De Mirecourt has consented to her passing the winter with me, and I am determined that she shall see a little society during that time.”

“Ah! I understand too well what that means,” groaned Mr. D’Aulnay. “So our present domestic rules are to be subverted, the house completely upset, and the whole place overrun with idle young fops, or unknown men with swords clashing against their heels, as you have been studiously hinting to me for some time past. Alas! I thought when the Chevalier de Lévis and his gallant epaulettes left the country, there was to be an end to all this military fervor or fever; and I must to my shame acknowledge, that if anything could have tended to console me during that darkest episode of the history of my country, it was the supposition I have just mentioned.”

“What would you, cher ami?” plaintively questioned Mrs. D’Aulnay. “Have we not mourned in sackcloth and ashes, as it were, for many a long and dreary month since; but people must live, and to live they must see society. I really would as soon assume the garb of a female Carmelite, and see you don a Trappist’s cowl and robe at once, as live any longer in the cloister-like seclusion in which we have been vegetating for an interminable time past.”

“Nonsense, Lucille! As to the Trappist’s cowl and robe, I think they would be more suitable to my age and tastes, and certainly far more comfortable, than the silk stockings and ball-room costume which your new projects will compel me so often to assume. But to discuss the matter seriously, surely you who used to talk so pathetically over the woes of Canada with the brave French soldiers who have left our shores – who used to enthral your listeners by your eloquent and patriotic denunciations of our enemies and oppressors, and were compared by Col. De Bourlamarque to one of the heroines of the Fronde, – surely you are not going to entertain and feast those same oppressors now?”

“My dear, dear D’Aulnay, I again repeat, what alternative have I? I cannot invite clerks or apprentices to my house, and our own people are nearly all dispersed in one direction or another. Those English officers may be tyrants, ruthless oppressors, what you will; but they are men of education and refinement; and – conclusive argument – they are my only resource.”

“Pray, tell me, then, when this reign of anarchy is to be inaugurated?” questioned Mr. D’Aulnay, silenced though not convinced.

“Oh, on that point, my dear André, I am certain of meeting with your approbation. The good old Canadian fête of la Sainte Catherine, a day which our ancestors from time immemorial have joyously observed, will be the evening I will choose for again opening our doors to something like life and gaiety.”

“And I fear closing them against peace and comfort; but, do you know any of the men who are destined henceforth to fill our salons and to eat our suppers?”

“Yes; Major Sternfield called here yesterday with that young Foucher, who, in times past, would scarcely have obtained admittance into my house; but, alas! society is so reduced in point of numbers, we cannot afford to be too exclusive now.”

“Was that long-legged flamingo I caught a glimpse of in the hall, Major Sternfield?” questioned Mr. D’Aulnay.

“Long-legged flamingo!” reiterated the lady, petulantly, “what an extraordinary choice of unsuitable epithets. Major Sternfield is certainly one of the handsomest and most elegant men I have ever met; and, what is more to the point, he is a perfect gentleman in manner and address. He expressed, in the most deferential terms, the earnest, anxious desire of himself, and many of his brother officers, to obtain an entrance into our Canadian salons –”

“Yes, to pick up any heiresses among us, and after turning the heads of all the rest of the girls, jilt them,” grumbled Mr. D’Aulnay.

“Ah, you are mistaken,” rejoined his wife with animation. “Myself and country-women will take good care that in all cases they shall be the sufferers, not ourselves. Antoinette and I shall break dozens of their callous hearts, and thus avenge our country’s wrongs.”

“Heaven preserve me from a woman’s logic!” muttered the sorely-tried husband, hurriedly re-opening his book, and settling himself back in his chair. “There, there, invite them all, from General to Ensign, if you will, but leave me in peace.”

Other titles by Heather Murray

Not in This Family

Gays and the Meaning of Kinship in Postwar North America

The Literary Societies of Nineteenth-Century Ontario