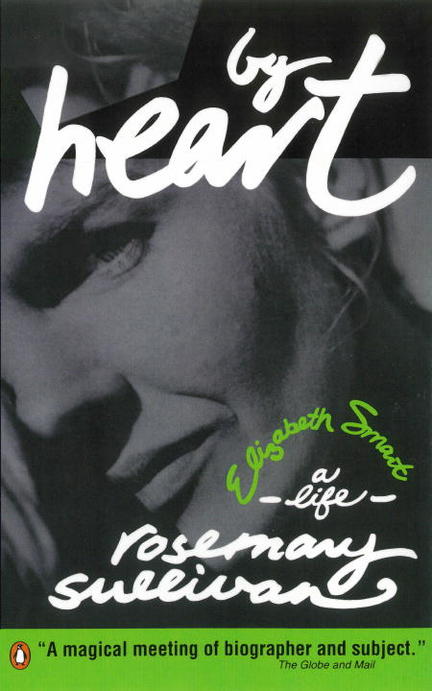 "The price of life is pain, since the price of comfort is damnation."

Sensuously beautiful, intensely passionate, generous to a fault — and one of the century's most brilliant writers of poetic prose — Elizabeth Smart carved her own destiny through sheer determination, strength and perserverance. In By Heart, the first biography of Smart, Rosemary Sullivan recounts the author's childhood in Ottawa as the second daughter of an affluent and well-connected family. Inspired by romantic notions of rebellion, Smart rejected what she perceived to be a colonistic literary community and entered a long period of self-imposed exile, desperate to escape family and country, and willing to sacrifice both wealth and propriety in favour of freedom.
During her frequent trips to Europe, New York, California and Mexico, Smart came to know many of the important writers of the day, including W.H. Auden, Christopher Isherwood and Lawrence Durrell. While browsing in a London bookstore, she discovered the poetry of George Barker and instantly fell in love with the married poet. They met. Thus began one of the most intense, extraordinary and scandalous love affairs of our time.
Their passionate and troubled relationship inspired Smart's By Grand Central Station, I Sat Down and Wept, which critic Brigid Bronphy has called one of the world's half dozen masterpieces of poetic prose. Partly because of the difficulties in single-handedly raising the four children she had with George Barker, and partly because of her own lack of confidence, it would be thirty-two years before Smart published a second novel.
By Heart explores the career of a woman writer in the 1940s: the struggle to speak when silence is seductive, the battle against a profound sense of inadequacy, the release and elation that comes out of the pain of writing. The life of Elizabeth Smart is a story of extremes, of life as the supreme fiction. As Smart asks in her final journals, "Can I be contented with my lot? Well, I danced."