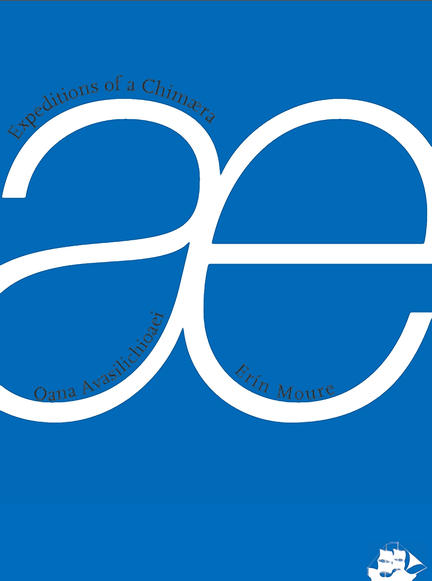 Expeditions, taken up by the explorers we all are, ultimately cannot be read. Only experienced. On venturing into it, you'll find your ticket is no good, expired, or valid only on Tuesday. Your fellow travellers will tell you you are wearing the wrong shoes. If you force your way past the gate, you will stub your toe, scrape your shins, lose your suitcase, throw the book across the room in a fit of outrage or fall under its spell and suddenly find it half-submerged in your bathwater. At times, you will even laugh aloud. Expeditions of a Chimï??ra is dialogic. Four pairs of hands try their luck at a game of cards. Nearby, questions sit, waiting to be asked. These expeditions are not progressions but digressions; they are translational in their effort to pull the author, kicking and screaming, out of the hat of authorial impossibilities.

"Expeditions expedites you into a circus: there is disguise, an acrobatic puff of smoke, a clown's painted face, a human cannonball and, down below its tightrope, an arena full of pawprints, with no net to catch your fall." Otilia Acacia

Oana Avasilichioaei's previous translations include Universal Bureau of Copyrights by Bertrand Laverdure, Wigrum by Quebecois writer Daniel Canty (2013), The Islands by Quebecoise poet Louise Cotnoir (2011) and Occupational Sickness by Romanian poet Nichita Stanescu (2006). In 2013, she edited a feature on Quebec French writing in translation for Aufgabe (New York). she has also played in the bounds of translation and creation in a poetic collaboration with Erín Moure, Expeditions of a Chimæra, (2009). Her most recent poetry collection is We, Beasts (2012; winner of the QWF's A.M. Klein Prize for Poetry), and her audio work can be found on Pennsound. She lives in Montreal. Learn more about Avasilichioaei at www.oanalab.com.
Ingrid Pam Dick (aka Gregoire Pam Dick, Mina Pam Dick, Jake Pam Dick et al.) is the author of Metaphysical Licks (BookThug 2014) and Delinquent (Futurepoem, 2009). Her writing has appeared in BOMB, frieze, The Brooklyn Rail, Aufgabe, EOAGH, Fence, Matrix, Open Letter, Poetry Is Dead, and elsewhere, and has been featured in Postmodern Culture; it is included in the anthologies The Sonnets (ed. S. Cohen and P. Legault, Telephone, 2012) and Troubling the Line: Trans and Genderqueer Poetry and Poetics, (ed. TC Tolbert and Tim Trace Peterson, Nightboat, 2013). Her philosophical work has appeared in a collection published by the International Wittgenstein Symposium. Also an artist and translator, Dick lives in New York City, where she is currently doing work that makes out and off with Büchner, Wedekind, Walser, and Michaux.

Other titles by Oana Avasilichioaei

The Strange Scent of Saffron

The United States of Wind

The Thought House of Philippa