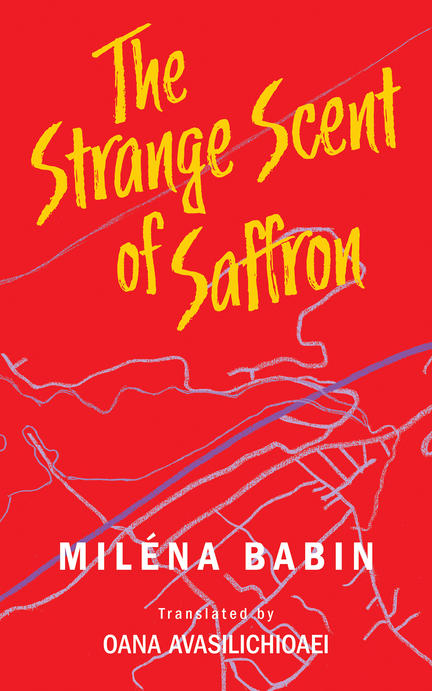 Lower Saint-Lawrence, summer 1988. Looking to escape the violent grip of her uncle and twin brother, Nil heads for Le Bic with a half-tamed fox in tow. There, the tough young woman meets Jacob, an HIV-positive restaurant owner mixed up in illegal saffron trafficking. Meanwhile in India, Amar is about to take part in his first harvest of the red gold while his sister Alaka tries to conceal the embarrassment of her first period. The Strange Scent of Saffron is a raw, gut-wrenching novel about the lack and gradual attainment of empowerment, partly through a sensorially-rich connection with the world.

Originally from Carleton-sur-Mer in the Gaspésie, Miléna Babin has lived in Quebec City for the past ten years. In her books, she likes to give life to impulsive and imperfect characters who are often hounded by darkness and suffering, but who find the courage to move toward the light. Exploring the balance between shadow and light is what drives her writing. Her work has been featured in several anthologies, and she has published the novel Les fantômes fument en cachette (Éditions XYZ, 2014) and the children’s book Évelyne, l’enfant-placard (Québec Amérique, 2019). Her second novel, L’étrange odeur du safran (Éditions XYZ, 2018), was shortlisted for the Prix France-Québec 2019. She has also worked as a screenwriter in recent years and is currently adapting L’étrange odeur du safran into a film.

Oana Avasilichioaei's previous translations include Universal Bureau of Copyrights by Bertrand Laverdure, Wigrum by Quebecois writer Daniel Canty (2013), The Islands by Quebecoise poet Louise Cotnoir (2011) and Occupational Sickness by Romanian poet Nichita Stanescu (2006). In 2013, she edited a feature on Quebec French writing in translation for Aufgabe (New York). she has also played in the bounds of translation and creation in a poetic collaboration with Erín Moure, Expeditions of a Chimæra, (2009). Her most recent poetry collection is We, Beasts (2012; winner of the QWF's A.M. Klein Prize for Poetry), and her audio work can be found on Pennsound. She lives in Montreal. Learn more about Avasilichioaei at www.oanalab.com.
Ingrid Pam Dick (aka Gregoire Pam Dick, Mina Pam Dick, Jake Pam Dick et al.) is the author of Metaphysical Licks (BookThug 2014) and Delinquent (Futurepoem, 2009). Her writing has appeared in BOMB, frieze, The Brooklyn Rail, Aufgabe, EOAGH, Fence, Matrix, Open Letter, Poetry Is Dead, and elsewhere, and has been featured in Postmodern Culture; it is included in the anthologies The Sonnets (ed. S. Cohen and P. Legault, Telephone, 2012) and Troubling the Line: Trans and Genderqueer Poetry and Poetics, (ed. TC Tolbert and Tim Trace Peterson, Nightboat, 2013). Her philosophical work has appeared in a collection published by the International Wittgenstein Symposium. Also an artist and translator, Dick lives in New York City, where she is currently doing work that makes out and off with Büchner, Wedekind, Walser, and Michaux.

There’s something not right about this girl’s face. As if her right eyelid is heavier than the left. Her uneven gaze makes her look like a friendly robot. She expresses herself with confidence and hesitation in the same breath, as if to cover her tracks. What’s behind that deep notch in the middle of her brow? She clearly bites her nails, and the remaining skin is blackened. Her hair droops sadly, stops just short of touching the shoulders. She stuck her tongue out to catch the last drop of beer. The antithesis of femininity, of most other young women who, like her, barely have a foot in their twenties. Actually, who goes around in such a clunker and could afford a meal at the Gourmand? Unless it holds a stash of dough lifted on her way here, which would explain why she keeps stealing anxious glances in its direction.

There’s no risk though, I’ve got her licence plate number.

Yet, this novel is not bleak. On the contrary, it’s propelled by an alluring vitality and page-turning inventiveness!

The disconcerting frankness of the writing, the skillful and witty storytelling, and the scathing humour of the dialogues blend to perfection in this novel that is best read on the roof of an old clunker in the company of a tame fox, if possible...

Once again, her writing shows a refined attention to detail, which she reveals with warmth and sensuality, yet always leaves incomplete, lending mystery to her characters, who are above all marked by the scars of their troubled lives... With a vivid, embodied style, The Strange Scent of Saffron probes the nebula of survival, solidarity, and abuse.

Blood is a literal and metaphoric presence throughout the novel: characters menstruate, wound themselves, contract and spread HIV, while also grappling with the blood ties of family and how they can become a snare trap. Babin’s writing is deeply invested in representing the corporeal world, even when that world becomes grotesque. There is the impression that no topic is off limits, especially in the relation to the bodies of young women. Utterly devoid of any attempt at sanitization, Babin depicts young female characters who lust, hunger, bleed, and contract and spread disease.

With a vibrant, frank style, Miléna Babin’s second novel draws the senses into a story made of blood, odours, and flavours.

Other titles by Oana Avasilichioaei

The United States of Wind

The Thought House of Philippa