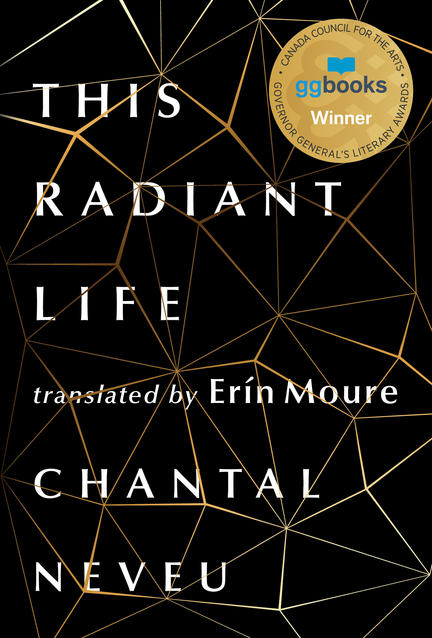 In this stunning long poem, Chantal Neveu draws from the lexicons of science, art, revolution and corporeal movement to forge intense and extended rhythms that invoke the elements and spaces making up our world. This is poetry capable of holding life and death, solidarity and love. Renewal. Breathing.

In its brevity and persistence, This Radiant Life is a material call for action: it asks us to let go, even just a little bit, of our individuality in favour of mutuality, to arrive separately yet in unison at a radiance in which all living beings can thrive.

“Moure has crafted a spectacular English poem in conversation with the French—a work channelling science, art, revolution and corporeal movement balanced in stillness and space. It is a thrilling space where meanings are amplified, beauty reverberates and the reader’s expectations are exceeded again and again. Moure advances new possibilities for both Neveu’s poem and translation itself.”

"This Radiant Life strikes a resonant chord with its sparse minimalism. This indexical poetry records private activities, travels, daily living, details the body’s nervous system alongside sudden explosions of brutal events and media frameworks. A capacity for complexity through elliptical building blocks.  Violence side by side with train journeys. Collective brutality side by side with personal intimacy or physiological flow. Very few words are hosted on each of these aerated pages. Turning the page in itself confirms the implicit need for breathing space, or for trying to make some sense of it all, while being carried along the currents of one’s own time. Everything intermingled. Inescapable as the butterfly effect. Words work like knots of awareness down the rope of lines." —Caroline Bergvall

"Oscillating between various subatomic particles, spaces, and word matter that make life life—i.e. the stuff and messiness of being, the macro and the micro, the chemistry, biology, geology, language of experience/experiment—This Radiant Life entreats us to slow down, attend to, and cherish the elemental. In so doing, we will have access to an inexhaustible force for resistance and resilience; we will be able to truly see and be seen by others. Powerfully embodied and chiselled by Chantal Neveu and deftly and intricately translated by Erín Moure, This Radiant Life is urgent, alive, and absolutely present." —Oana Avasilichioaei

"As Chantal Neveu and Erín Moure mine the mono dimensional sediment of language they liberate a vocabulary of synaesthetic perception. This Radiant Life crushes narrative and reference, not into parts of speech but into illuminated particles, 'words as such.' In this trans-collaboration, words reciprocate the speed and spaces on the perimeter of public sensibility. Gangues of language like 'eye to eye' 'word flow' in the face of the Arab Springs, 'the sound of paper,' 'coffee/ reheated/ on the hob,' 'zig?zag' float by as radiant flecks and syllables on a perceptual horizon. Each turn of the page carries an echo of isolate light, the answer to what happens next." —Fred Wah

“In a book which is as much about physics as it is about the pressing conflicts of our current age, This Radiant Life seeks to find the light that emerges not just from the collisions of particles but also the actions and interactions of people.”  —ZZYZYVA