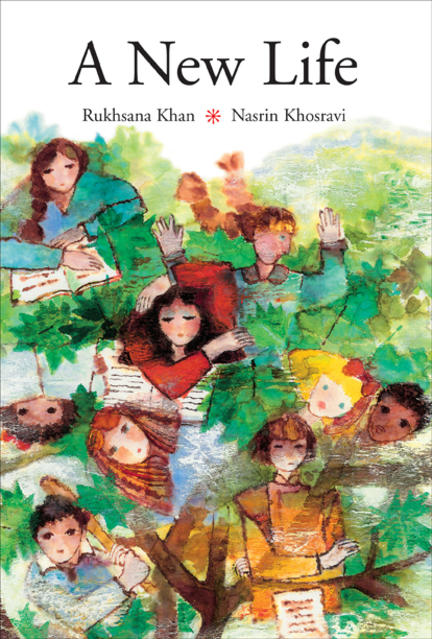 Eight-year-old Khadija, her older brother, Hamza, and their parents have just arrived in Canada from Pakistan. In their classrooms on the first day of school Khadija and Hamza are confronted by a sea of unfamiliar faces. Everyone looks so different from the way they did back home.

At first Khadija and Hamza feel left out at recess, and they both become the targets of school bullies. It's really hard to have to speak English all day long. And Khadija just can't figure out how to get enough water out of the drinking fountain. Hamza, in particular, misses everything about Pakistan -- his friends, his school and his grandmother. But gradually, Khadija and Hamza find new friends and begin to feel more at home.

Nasrin Khosravi was a world-renowned illustrator of children's books. Born in Tehran, Iran, she graduated from Tehran University in graphic and fine arts, taught illustration at Honar University and illustrated more than thirty-five books for children. She also exhibited her paintings in solo and group exhibitions in many countries, receiving honors in Italy, Germany, Iran, Austria, India, France, Spain and Slovakia. Nasrin won the Grand Prize at the Noma Concours in Japan and was selected as best illustrator at the Tehran International Biennial of Illustration for the paintings that now appear in this new version of the Thumbelina story. She was also nominated for the prestigious Hans Christian Andersen Award and the UNICEF Ezra Jack Keats Award. She spent her last years painting, and living with her family in Canada.

Eight-year-old Khadija, her older brother, Hamza, and their parents have come to Canada from Pakistan. They struggle and learn while they adjust to a new language, a new society and life in a new country. Khadija and Hamza initially are targets of school bullies but then make friends and begin to feel more at ease in their new home.