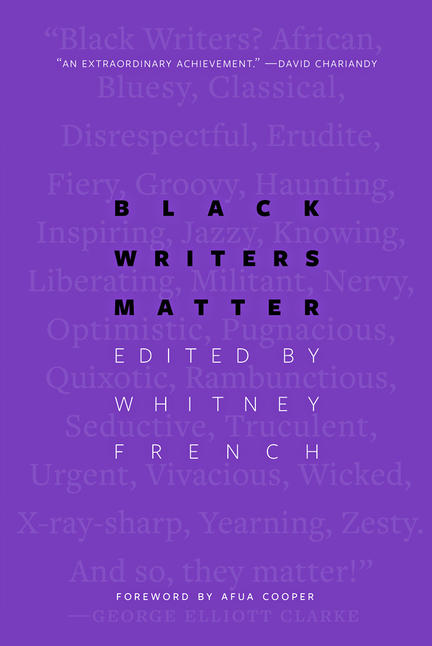 An anthology of African-Canadian writing, Black Writers Matter offers a cross-section of established writers and newcomers to the literary world who tackle contemporary and pressing issues with beautiful, sometimes raw, prose. As editor Whitney French says in her introduction, Black Writers Matter “injects new meaning into the word diversity [and] harbours a sacredness and an everydayness that offers Black people dignity.” An “invitation to read, share, and tell stories of Black narratives that are close to the bone,” this collection feels particular to the Black Canadian experience.

"Reading these stories gave me both joy and grief." —Afua Cooper

"Collected in these pages are voices that need to be urgently heard, engaged and reckoned with. Black life, Black Canadian life, Black Canadian diasporic life in full colour and full of desire is on offer in Black Writers Matter." —Rinaldo Walcott, professor at University of Toronto and author of Queer Returns: Essays on Multiculturalism, Diaspora and Black Studies

"Black Writers Matter is an extraordinary achievement, a bold and loving gathering of Black writing in its sublimity; its stylistic and thematic complexity; its regional, cultural, generational, and experiential differences; its fiercely constellated energy. Whitney French and the talented contributors to this book offer us vital new writings within a two-hundred-year legacy of yearning and truth-telling. Please read this book." —David Chariandy, author of Soucouyant and Brother

The founder and co-editor of From the Root Zine, Whitney French has been published in Descant Magazine, anthologized in The Great Black North: Contemporary African Canadian Poetry, and is the host and facilitator of the Writing While Black creative writing studio. Whitney lives in Toronto.

What to Read for Black Futures Month

Our focus on community connections continues with this cross-genre list of twelve recent books that delve into community in singular and fascinating ways.  …