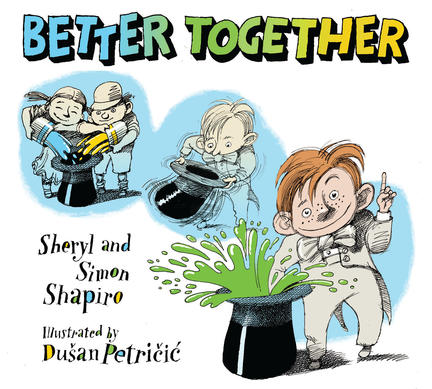 Mix anything together and who knows what you’ll get.

You may create something wonderfully different! Water and flour make a sticky paste perfect for arts and crafts. And what can be better than mixing sugar, milk and butter to produce yummy fudge? With simple words and vivid illustrations, this series of 13 fun and bouncy poems illustrates the concept of combining things. Mixing blue and yellow paint to make green is probably familiar to most children, but who thinks of music as being the result of mixing the sounds of instruments? Or a sports team as the combination of many players with different strengths? Young children will love listening to these funny poems while learning about a simple, but important, concept.

When Sheryl and Simon Shapiro met over 35 years ago in South Africa (where they were born and grew up), they had very different interests. Simon had studied subjects like applied mathematics and physics, and worked as a computer programmer. Sheryl had studied print-making and oil painting and worked as an art teacher. Over the years, their lives—and their interests—changed. Simon took up photography as a hobby, learning about color and composition, and now loves visiting art galleries. Sheryl became an art director and book designer, and now spends all day, every day, using a computer.They have other things in common like enjoying music, movies, theater, reading, and spending time with their son Stephen who has written four books for Annick Press. They also discovered that they liked writing humorous rhymes for special occasions. When the opportunity came up to write a book together, they jumped at the chance.Their different abilities and different approaches made working on the book interesting. And there were many happy hours along the way. But they agree that working separately could never have produced the amusing mixtures book called Better Together (2011). Their second rhyming picture book, Slither Slide, What’s Outside? (2012) is a National Parenting Publications Awards, Honor Winner. Now they have written two picture books in verse that explore the concepts of shapes. Ladybugs Have Lots of Spots and Zebra Stripes Go Head to Toe (Fall 2013) combine vibrant photos and bouncy rhymes to introduce young children to the concept of shapes.Sheryl and Simon live in Toronto, Ontario.

Sheryl Shapiro is an art director and book designer for Annick Press. She has co-authored five children's books for Annick with her husband, Simon Shapiro. She lives in Toronto.

“The concept is terrific and the illustrations similarly sublime.”

“Young students will be easily engaged by the colourful and vibrant drawings.”

“This book is an excellent vehicle for teaching children cause and effect . . . it inspires my daughter to ask questions.”

“A simple rhyming scheme . . . plus word choices that kids will appreciate make the poems accessible.”

“While intended to be funny, the poems are also great at encouraging and fostering creative thought. The illustrations are fabulous, and only serve to enhance the humour of the text.”

“Petricic’s colorful cartoon illustrations communicate the actions and emotions of each poem, often extending the story beyond the text.”

“The mix of vivid illustrations and energetic text has created a fun book that both kids and parents will enjoy.”

The Deakin Review of Children’s Literature, 07/11

Children and mixtures go together like water and dirt. There are all kinds of mixtures, ones for which we “stir and squoosh” the ingredients together, ones for which we “squish and moosh” them, and others for which we “mingle, blend, and mix” them. What’s exciting is when something new is created. Sugar, heated milk and butter make silky-looking fudge that is just begging to be tastetested. Mixing flour and a splash of water comes in handy when we need a sticky substance for our craft project. Rubbing and scrubbing with soap and water gets the dirty puppy clean and also creates a lot of fun bubbles; we just need to watch out for the boy who wants to dry the dog by putting it through the spin cycle.

While most of the mixtures in the book involve tangible items that can be mixed together in some way, a few of them, such as music, are purposely abstract. A two-stanza poem, both stanzas having four lines, accompanies each mixture. The beat is strong throughout, the rhythm natural and bouncy, the writing humorous and engaging. Petričić’s pen-and-ink illustrations are wonderful, filled with wit and whimsy. The result, of course, when text and illustrations are mixed “just so,” as they are here, is the creation of something wherein both are better together.

What do you get when you mix a bunch of funny poems and imaginative artwork? A book about mixtures! In this book the concept of combining things to create something new is explored. Children will learn how to mix ingredients to make fudge or cinnamon toast, mix two colours to make a third colour and even how to combine a bunch of instruments to make a band.

Other titles by Simon Shapiro

Other titles by Sheryl Shapiro