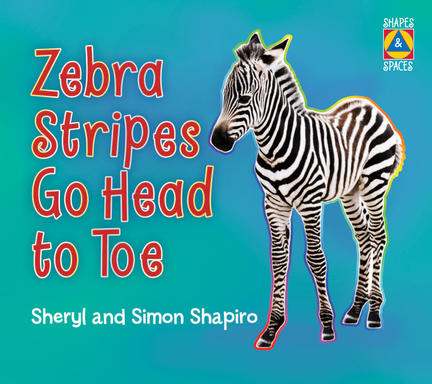 This little book shows children
That squares are here and there.
And if they keep an eye out,
then stripes are everywhere.

The fun, simple text and vibrant design of Zebra Stripes Go Head to Toe explore the concept of squares and stripes. Using words such as ‘cube,’ ‘line,’ ‘block,’ ‘band,’ short poems encourage readers to spot the similarities (and differences) between the shapes of the stripes on a zebra and the stripes on a crosswalk, for example, or between a square soda cracker and cubes of cheese. Other examples explain the features of each shape; a square puzzle piece has four corners, as does a square chocolate (until someone takes a bite)! Slats on a fence and striped socks both have lines, too—but on one of them, you can’t see through!

Whether paired with Ladybugs Have Lots of Spots or read independently, this innovative book is a great way to introduce the concept of shapes to young children.

Sheryl Shapiro is an art director and book designer for Annick Press. She has co-authored five children's books for Annick with her husband, Simon Shapiro. She lives in Toronto.

When Sheryl and Simon Shapiro met over 35 years ago in South Africa (where they were born and grew up), they had very different interests. Simon had studied subjects like applied mathematics and physics, and worked as a computer programmer. Sheryl had studied print-making and oil painting and worked as an art teacher. Over the years, their lives—and their interests—changed. Simon took up photography as a hobby, learning about color and composition, and now loves visiting art galleries. Sheryl became an art director and book designer, and now spends all day, every day, using a computer.They have other things in common like enjoying music, movies, theater, reading, and spending time with their son Stephen who has written four books for Annick Press. They also discovered that they liked writing humorous rhymes for special occasions. When the opportunity came up to write a book together, they jumped at the chance.Their different abilities and different approaches made working on the book interesting. And there were many happy hours along the way. But they agree that working separately could never have produced the amusing mixtures book called Better Together (2011). Their second rhyming picture book, Slither Slide, What’s Outside? (2012) is a National Parenting Publications Awards, Honor Winner. Now they have written two picture books in verse that explore the concepts of shapes. Ladybugs Have Lots of Spots and Zebra Stripes Go Head to Toe (Fall 2013) combine vibrant photos and bouncy rhymes to introduce young children to the concept of shapes.Sheryl and Simon live in Toronto, Ontario.

“… challenges your child to look around them and find these shapes in the world that they inhabit.”—Story Wraps, 11/12/13

“… a delight to explore with younger children.” —Resource Links, 12/13

Other titles by Sheryl Shapiro

Create Your Own Millennium Time Capsule

Other titles by Simon Shapiro