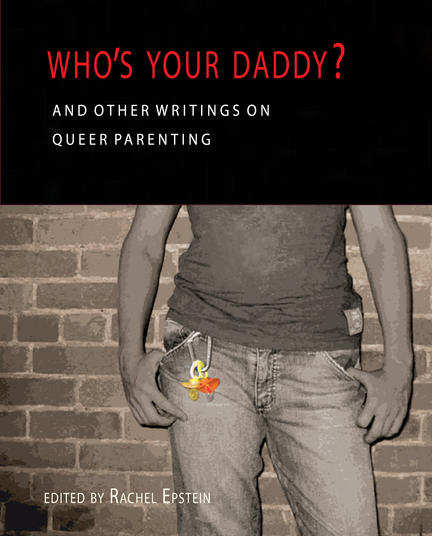 "Whos Your Daddy?" is a timely and dynamic collection that offers offers an honest exploration of the diversity that exists within queer families and a broader understanding of the complex issues that concern both queer parents and their children. These writings make a profound contribution to queer parenting discourse, looking at issues that have been previously unaddressed and introducing new and vibrant perspectives.

"Whos Your Daddy?" not only contains a wealth of information for new parents and those thinking of becoming parents but also provides invaluable information for counsellors, health care workers, social workers and human resource professionals. Website resources and recommended readings are provided and boxed information highlights support groups and organizations.

Rachel Epstein has been a queer parenting activist, educator, and researcher for close to twenty years and coordinates the LGBTQ Parenting Network at the Sherbourne Health Centre in Toronto, Ontario. She has published on a wide range of queer parenting issues, including assisted human reproduction, queer spawn in schools, butch pregnancy, and the tensions between queer sexuality, radicalism, and parenting. Rachel is the 2008 winner of the Steinert Ferreiro Award (Community One Foundation), recognizing her leadership and pivotal contributions towards the support, recognition, and inclusion of queer parents and their children in Canada.

EMMA DONOGHUE was born in Dublin and lived in England for many years before moving to Canada. She writes in many genres, including theatre, radio drama and literary history, but is best known for her fiction, both historical (Slammerkin, The Sealed Letter, Astray, Frog Music) and contemporary (Stir-Fry, Hood, Landing, Touchy Subjects). Her seventh novel, Room, won the Rogers Writers’ Trust Fiction Prize and the Commonwealth Writers’ Prize (Canada and the Caribbean region) and was shortlisted for the Man Booker and Orange Prizes. It sold more than two million copies. Donoghue scripted the film adaptation, a Canadian-Irish film by Lenny Abrahamson starring Brie Larson, which was nominated for four Academy Awards, including Best Picture. And her most recent novel, The Wonder, was shortlisted for the Scotiabank Giller Prize in 2016.

Thom Vernon has worked in film, television and theatre since 1989, including appearances on Seinfeld, General Hospital and The Fugitive. He has been the Actorsâ?? Gang Youth Education Program director, and has worked extensively with at-risk people, including as an arts educator at the Lorraine Kimsa Theatre for Young People. His 'Frank and Mary' stories have been produced at the Los Angeles Improv, and his screenplays and fiction have placed in various competitions, including Paramountâ??s Chesterfield Writerâ??s Film Project and the Open Door Contest. He hails from Michigan, but he and his partner live in exile in Toronto. This is his first novel.

Syrus Marcus Ware is a Canadian artist, activist and scholar. He is currently a CLA Assistant Professor in the School of the Arts at McMaster University. He has worked since 2014 as faculty and as a designer for The Banff Centre. Ware is a founding member of Black Lives Matter Toronto. For 13 years, he was the coordinator of the Art Gallery of Ontario's youth program. During that time Ware oversaw the creation of the Free After Three program and the expansion of the youth program into a multi pronged offering. He has published four books and in 2020 co-edited (with Rodney Diverlus and Sandy Hudson) Until We Are Free: Reflections on Black Lives Matter in Canada, a collection of reflections on the Black Lives Matter movement in Canada.

Lois Fine has been widely published in anthologies, newspapers, magazines, and journals across various genres. Her article “Outlaw Moms,” first published in NOW Magazine and later in the anthology Who’s Your Daddy?, documents her and others’ successful Ontario charter challenge regarding queer parenting. Lois lives in Toronto.

David Rayside is a professor in the Department of Political Science and an associate of the Mark S. Bonham Centre for Sexual Diversity Studies at the University of Toronto. He is the author of  Queer Inclusions, Continental Divisions: Public Recognition of Sexual Diversity in Canada and the United States.

Karleen Pendleton Jimenez is the author of Lambda Literary Awards finalists Are You a Boy or a Girl? and How to Get a Girl Pregnant, Tomboys and Other Gender Heroes, and numerous short stories and essays. She wrote the award-winning animated film Tomboy, and has been recognized by the American Library Association and the Vice Versa Awards for Excellence in the Gay and Lesbian Press. She teaches education, gender, and social justice at Trent University. Raised in Los Angeles, she lives in Toronto with her partner and daughter.

ANNE FLEMING is the author of Pool-Hopping and Other Stories (shortlisted for the Ethel Wilson Fiction Prize, the Danuta Gleed Award and the Governor General’s Award), and Anomaly and Gay Dwarves of America. She is a long-time and highly regarded teacher of creative writing who has taught at the University of British Columbia, Emily Carr University of Art and Design, Douglas College, Kwantlen University College and the Banff Centre for the Arts. She lives in Vancouver. The Goat is her first full-length work for young readers.

Elizabeth Ruth is a writer, editor, creative writing instructor and mother living in Toronto, Canada. Her first novel, Ten Good Seconds of Silence was a finalist for the Writers' Trust of Canada Fiction Prize, the Amazon.ca Best First Novel Award and the City of Toronto Book Award. Her critically acclaimed second novel, Smoke, was chosen for the 2007 One Book One Community program. Elizabeth Ruth's third novel - about a female bullfighter - will be published in Canada in fall 2012 by Cormorant Books.

Elizabeth is well known for her mentorship of aspiring writers. She teaches at the University of Toronto, and through the Humber School for Writers. In 2011 Elizabeth held the position of Writer-In-Residence at the Toronto Public Library. Elizabeth has also held the position of Writer-In-Residence at the Oshawa and Kitchener Public Libraries. In recent years, Elizabeth has mentored middle and high school English students through WIER, Writers in Electronic Residence. In 2011 she delivered workshops and offered manuscript evaluations to writers across northern Ontario. In 2012, together with Ann Douglas, Elizabeth Ruth was hired by The Writer's Union of Canada (TWUC) to deliver professional development workshops to writers across the country. She is a long-standing member of TWUC and the current chair of the author's advisory committee of the Writers' Trust of Canada.

Elizabeth Ruth has a BA in English Literature and an MA in Counselling Psychology, both from the University of Toronto. She is also a graduate of the Humber School of Writers

Postmodern indeed. As a single Black lesbian mother, I assumed that a resource like this wouldn't yet exist. On searching, I discovered a literary road map to queer parenting and family that is current, diverse and mini-encyclopedic in its breadth. Reading this work made me feel as though I had added to my family of choice.

Other titles by Rachel Epstein

Other titles by Emma Donoghue

The Pull of the Stars

The Lotterys More or Less

The Lotterys Plus One

Other titles by Shira Spector

Other titles by Suzanne Pelka

Until We Are Free

Queer of Colour Formations in Toronto

Queer of Colour Formations in Toronto

Love Is In The Hair

Other titles by Maura Ryan

A guide for front-line health and social service providers

Other titles by Adinne Schwartz

Freda & Jem's Best of the Week

Other titles by Jamie K. Evans

Other titles by Karleen Pendleton Jimenez

Faith, Politics, and Sexual Diversity in Canada and the United States

Public Recognition of Sexual Diversity in Canada and the United States

A Small Town in Modern Times

Other titles by Toby Hill-Meyer

The Street Belongs to Us

Other titles by Julie Mooney-Somers

Other titles by Jaime Grant

Issue Is 'Ism, The

Women of Colour Speak Out

The Best of Fireweed

Other titles by Joanna Radbord

Other titles by Anne-Marie MacDonald