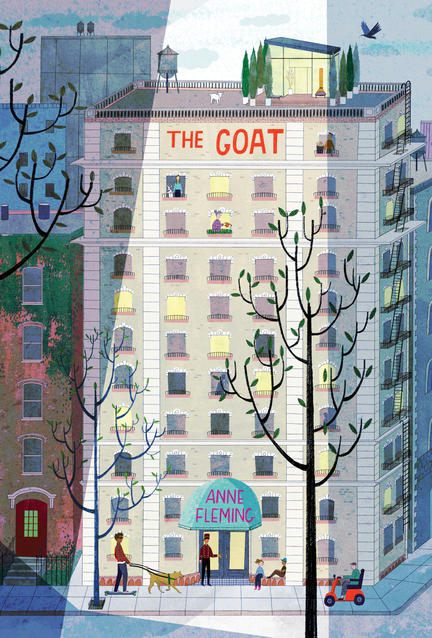 When Kid accompanies her parents to New York City, she discovers a goat living on the roof of her Manhattan apartment building— but she soon realizes a goat on the roof may be the least strange thing about her new home, whose residents are both fascinating and unforgettable.

When Kid accompanies her parents to New York City for a six-month stint of dog-sitting and home-schooling, she sees what looks like a tiny white cloud on the top of their apartment building.

Rumor says there’s a goat living on the roof, but how can that be?

As Kid soon discovers, a goat on the roof may be the least strange thing about her new home, whose residents are both fascinating unforgettable.

In the penthouse lives Joff Vanderlinden, the famous skateboarding fantasy writer, who happens to be blind. On the ninth floor are Doris and Jonathan, a retired couple trying to adapt to a new lifestyle after Jonathan’s stroke. Kenneth P. Gill, on the tenth, loves opera and tends to burble on nervously about his two hamsters — or are they guinea pigs? Then there’s Kid’s own high-maintenance mother, Lisa, who is rehearsing for an Off Broadway play and is sure it will be the world’s biggest flop.

Then Kid meets Will, whose parents died in the Twin Towers. And when she learns that the goat will bring good luck to whoever sees it, suddenly it becomes very important to know whether the goat on the roof is real.

CCSS.ELA-LITERACY.RL.4.6
Compare and contrast the point of view from which different stories are narrated, including the difference between first- and third-person narrations.

CCSS.ELA-LITERACY.RL.5.9
Compare and contrast stories in the same genre (e.g., mysteries and adventure stories) on their approaches to similar themes and topics.

ANNE FLEMING is the author of Pool-Hopping and Other Stories (shortlisted for the Ethel Wilson Fiction Prize, the Danuta Gleed Award and the Governor General’s Award), and Anomaly and Gay Dwarves of America. She is a long-time and highly regarded teacher of creative writing who has taught at the University of British Columbia, Emily Carr University of Art and Design, Douglas College, Kwantlen University College and the Banff Centre for the Arts. She lives in Vancouver. The Goat is her first full-length work for young readers.

Other titles by Anne Fleming