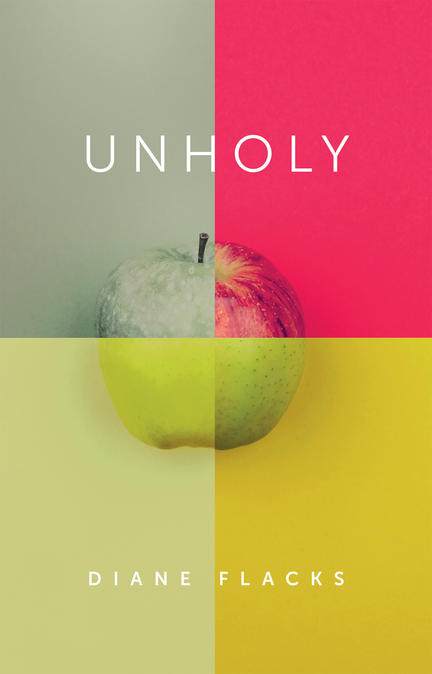 Four female panellists face off in a wild, whip-smart televised debate about the intersection of religion and misogyny. On one side, there’s Maryam, a progressive Muslim lawyer, and Yehudit, an Orthodox Jewish spiritual leader. The other has Liz, a lesbian antitheist pundit, and Margaret, an excommunicated nun. The debaters wrestle with themselves and with each other: Can you be a feminist and believe in religion? What can or can’t be forgiven? Why do we have faith to begin with? Between the arguments, each of the debaters return to a seminal and secret moment in their past that represents a crisis of faith, leading the debate to become more and more personally charged, until it climaxes in an epic battle.

Unholy delves into the biblical struggles that tear us apart and make us who we are. It’s about having the courage to take the leap in life and into love. What is more holy than that?

Liz: Can we go back to something Maryam said earlier about the niqab?

Richard: I would like to pick up on this. Margaret, Yehudit, I know we haven’t gotten to your remarks yet—​

Margaret: That’s all right, Richard. I’m as patient as Job.

Yehudit: Job didn’t have a choice, but go ahead.

Richard: Maryam, you were one of the lawyers on the team that supported the Canadian woman who didn’t want to take off her niqab to testify in the trial of her accused rapist. It seems to me that an accused has a right to face his accuser, doesn’t he?

Maryam: And what about her rights? I thought we cared about her.

Richard: Would you wear a niqab?

Maryam: No, Richard, I would not. Would you wear a leather jockstrap?

Richard: Where are we going with this?

Maryam: Do you like my shoes? These cost three hundred dollars. That may or may not be more than the honorarium I am being paid to be here tonight. But these shoes help me express myself. I love them. The niqab is a form of self-​expression. While I may not like low-​rise jeans, I will fight for Liz’s right to wear them.

Liz: That’s cute. You know what’s not cute, but is actually appalling? You’re fighting for a woman’s right to be invisible. Richard could wear a leather jockstrap—​

Richard: I may be wearing one right now—​

Liz: —​and he will still be a white man who is controlling this debate.

Richard: (to audience) Controlling? I don’t know about that . . .

Liz: No? Richard’s discreet cowhide underthings are not screaming to the world that he is someone’s property. Erasable, unknowable. In every society where women have been seen—​empowered—​the quality of life for the entire society improves. My opponent said that herself, at a speech at Carleton University / just last month—​

Maryam: What empowers women is the right to choose, no matter how unpleasant to the majority.

Liz: Most women do not choose to wear the niqab!

Maryam: But some do. I see that woman. I care about her, too. She may not be ready to remove it. She may not feel safe. It’s the same as outing gay people—​

Maryam: Do you believe in outing gay people?

Liz: Well. I want everyone to come out.

Maryam: But would you force someone?

Maryam: But / would you force them?

Richard: But would you?

Liz: It’s not the same thing!

Maryam: Honestly, in Quebec, Bill 62, the religious neutrality law: a bus driver can’t even where a head scarf!

Yehudit: Or a kippa!

Maryam: But a cross is okay.

Maryam: There are maybe a dozen women wearing the niqab and one hundred politicians fighting it. Like taking a sledgehammer to kill a fly. What is it about really? Political point-​scoring for the nationalist right wing in this country. It’s so cynical I can barely dignify it by discussing it.

Maryam: The wild racists have been released by Trump—​murdering worshippers in mosques and synagogues / putting children in cages—​

Liz: Look, Trump is Mussolini. But, the left has got to stop wussing out when it comes to women. We are afraid to say “don’t wear a niqab” because we have to protect religious rights?!

Yehudit: In this climate, yes!

Maryam: Now is not the time to be tacitly approving of Islamophobia—​

Richard: Are you saying Liz is Islamophobic?

Liz: No no no no no, let’s be clear. It is not Islamophobic to criticize the niqab any more than it’s anti-​Semitic to say Lev Tahor is a cult or anti-​Christian to say the church shelters pedophiles. That is why we’re here, right, Margaret? Ayaan Hirsi Ali, who I’ve met, by the way—​

Liz: Yes. She’s more likeable in person. She’s taller. She said, (reads) “It’s not Islamophobic to point to those people who use the Quran to subject women and say, ‘This is being done in the name of your religion, do something about it”—​that’s not Islamophobic, it’s fair.”

Margaret: It’s like when Jewish people say it’s anti-​Semitic to question Israel. And we all have questions about Israel!

Maryam: Would you agree with that, Liz? Am I anti-​Semitic if I say Israel is an apartheid state?

Yehudit shoots Maryam a look. They look at each other. Beat.

Liz: Apartheid is not a sound argument, if I were to make one, which I won’t because I would prefer to be turned into a pillar of salt and drowned in a world-​wide flood by a psychopathic god than talk about Israel and Palestine.

Richard: Let’s stick with the niqab for now.

Maryam: Our policy is clear. (reads from her notes) “Forcing a Muslim woman to remove her niqab has the potential to be a traumatic invasion of her privacy.” In fact, it may discourage her from reporting sexual / assault.

Liz: What discourages her is that she lives in a community where it’s perfectly acceptable to “beat, whip, or scourge” / your wife for “disobedience,” with a piece of wood—​

Yehudit: There’s no domestic violence in secular communities?! / Come on!

Liz: —​but I’m going to tell you honestly, and I would ask you all to be honest with yourselves. When you see a woman in a niqab, her face completely erased except for a slit for her eyes, her nose and mouth covered, her hands and her entire body draped in a heavy black tent, do you not have a visceral reaction? It infuriates me. It makes me feel like I am suffocating. I want her to take it off and let her skin feel the sun. To be free to run, to eat, to touch. I am furious with a system that dreamt up such a dismissing, oppressive, shaming practice that makes women invisible, and denies their own bodies. And while I agree that the state has no business forcing women to dress a certain way, in this case, I kind of hope they do.

Maryam: You would have us believe that a Muslim woman cannot be trusted to know her own mind. How is that not racist?!

Liz: Women can be misogynists; gay people can be homophobes!

Maryam: Is that what you think I am? A naive Muslim woman trotted out to support the work of the evil fundamentalists?

Liz: How else can I explain it?!

Maryam: I just did!

Richard: Okay, let’s not make this a debate exclusively about Islam because that is Islamophobic.

Maryam: You were granted freedom by accident of birth. You have never had to struggle for it, and you don’t appreciate its nuance and how hard you have to fight for it, even when you don’t like it.

“Necessary and timely. It is important in creating a dialogue for women to discuss how religion has created a world divided by beliefs, while at the same time, seeking a path towards reconnection.”

“Unholy is a remarkably funny and intellectually stimulating play about feminism, religion and tolerance and serves as a balm to all the hate-based discussion of these topics one encounters nowadays in all forms of media.”

“There is no hiding in Unholy—there’s bad, morally questionable, and worse. That’s what makes it so good.”