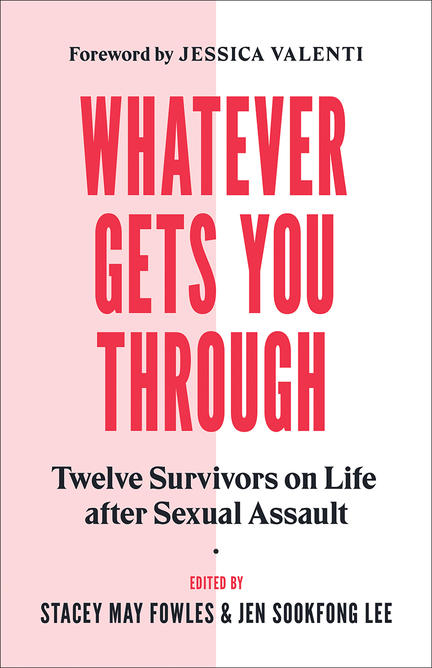 Personal stories of surviving after the trauma of sexual assault.

In the era of #MeToo, we’ve become better at talking about sexual assault. But sexual assault isn’t limited to a single, terrible moment of violence: it stays with survivors, following them wherever they go.

Through the voices of twelve diverse writers, Whatever Gets You Through offers a powerful look at the narrative of sexual assault not covered by the headlines—the weeks, months, and years of survival and adaptation that people live through in its aftermath. With a foreword by Jessica Valenti, an extensive introduction by editors Stacey May Fowles and Jen Sookfong Lee, and contributions from acclaimed literary voices such as Alicia Elliott, Elisabeth de Mariaffi, Heather O’Neill, and Juliane Okot Bitek, the collection explores some of the many different forms that survival can take.

From ice hockey to kink, boxing to tapestry-making, these striking personal essays address experiences as varied as the writers who have lived them. With candor and insight, each writer shares their own unique account of enduring: the everyday emotional pain and trauma, but also the incredible resilience and strength that can emerge in the aftermath of sexual assault.

Jen Sookfong Lee was born and raised on Vancouver's East Side, and she now lives with her son in North Burnaby. Her books include The Conjoined, nominated for the International Dublin Literary Award and a finalist for the Ethel Wilson Fiction Prize; The Better Mother, a finalist for the City of Vancouver Book Award; The End of East; Gentlemen of the Shade; Chinese New Year and The Animals of Chinese New Year. Jen was a columnist for CBC Radio One's The Next Chapter for many years. She teaches at The Writer's Studio Online with Simon Fraser University, edits fiction for Wolsak & Wynn and co-hosts the literary podcast Can't Lit.

Stacey May Fowles is a writer and McGill Graduate in English Literature and Womenâ??s Studies who has worked in the literary and gallery communities of Montreal, Toronto and Vancouver. Her written work has been published in various digital and literary publications, including Fireweed, The Absinthe Literary Review, Kiss Machine, subTERRAIN, Lickety Split and Hive Magazine.Â  Her non-fiction piece Friction Burn appeared in the widely acclaimed anthology Nobody Passes: Rejecting the Rules of Gender and Conformity (ed. Matt Bernstein Sycamore, Seal Press.) She has work forthcoming in the anthology Transits: Stories from In-between (Invisible Publishing) and CahootsÂ magazine.Â She is a recent recipient of both the Toronto Arts Council, Ontario Arts Council and Canada Council for the Arts grants for works in progress and her first novel, Be Good, is forthcoming with Tightrope Books in fall 2007. She is currently working her second novel, every other love that is happening to you right now is not this big and Unconvincing, a collection of short stories.Â Â

Other titles by Jen Sookfong Lee

The Journey of Immigrants and Refugees

A Celebration for Everyone

Gentlemen of the Shade

My Own Private Idaho

Other titles by Stacey May Fowles

by (author) Stacey May Fowles
illustrated by Marie Lafrance

Loving the Game That Saved Me

by (author) Stacey May Fowles
illustrated by Marlena Zuber

Books that challenge binary and complicate matters in the most interesting and useful ways.