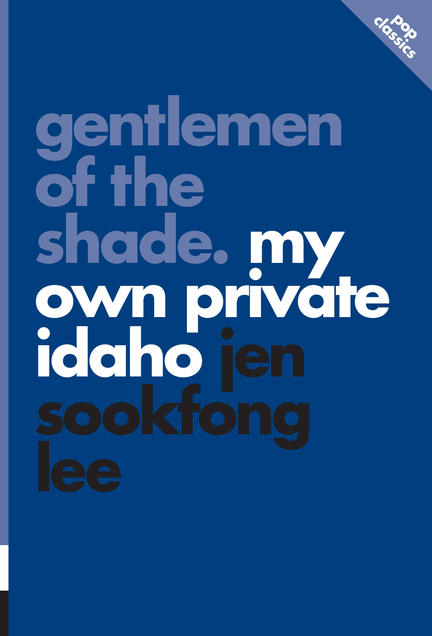 Gus Van Sant’s 1991 indie darling My Own Private Idaho perplexed and provoked, inspiring a new ethos for a new decade: being different was better than being good. Gentlemen of the Shade examines how the film was a coming-of-age for a generation of young people who would embrace the alternative and bring their outsider perspectives to sustainability, technology, gender constructs, and social responsibility.

My Own Private Idaho — fragmented and saturated with colour and dirt and a painfully beautiful masculinity — also crept into popular media, and its influence can still be traced. R.E.M. Portlandia. Hipsterism. James Franco. Referencing the often-funny and sometimes-tragic cultural touchstones of the past 26 years, Gentlemen of the Shade sets the film as social bellwether for the many outsiders who were looking to join the right, or any, revolution.

Jen Sookfong Lee was born and raised on Vancouver's East Side, and she now lives with her son in North Burnaby. Her books include The Conjoined, nominated for the International Dublin Literary Award and a finalist for the Ethel Wilson Fiction Prize; The Better Mother, a finalist for the City of Vancouver Book Award; The End of East; Gentlemen of the Shade; Chinese New Year and The Animals of Chinese New Year. Jen was a columnist for CBC Radio One's The Next Chapter for many years. She teaches at The Writer's Studio Online with Simon Fraser University, edits fiction for Wolsak & Wynn and co-hosts the literary podcast Can't Lit.

“Lee perfectly captures the feeling of the pre-internet early 1990s and how My Own Private Idaho helped shape and define alternative culture, as well as influence the ideas and attitudes of a generation.” — This Magazine

“Jen Sookfong Lee’s Gentlemen of the Shade, her critical appreciation of Gus Van Sant’s 1991 film My Own Private Idaho, is the seventh Pop Classics title and among the best I’ve read among these series in making a case to a general reader for the pop artifact at hand … More than Gen X nostalgia, Lee is interested in how aesthetics influenced the choices of a generation. That should be of interest to us all.” — Globe and Mail

“Gentlemen Of The Shade: My Own Private Idaho by Jen Sookfong Lee revisits the film’s impact on the youth of 90s and how that impact informed the decisions of the adults they would become … [Jen Sookfong Lee] is one of the very best.” — LaineyGossip.com

“Analyzing My Own Private Idaho’s philosophies and depictions of same-sex love and masculinity, Gentleman of the Shade also takes a look at how the film ended up indirectly influencing popular culture and media in an indelible way, pinpointing it everywhere from R.E.M. to James Franco.” — Book Riot

Other titles by Jen Sookfong Lee

The Journey of Immigrants and Refugees

A Celebration for Everyone

Whatever Gets You Through

by (author) Jen Sookfong Lee
edited by Stacey May Fowles