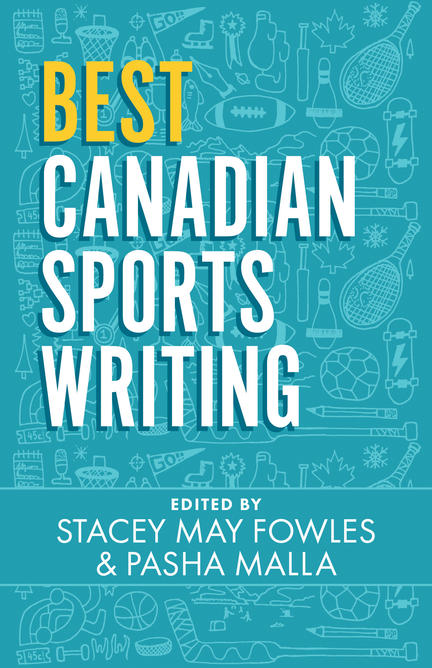 38 pieces that will be remembered for seasons to come

For 25 years, sports journalists south of the border have been collected in best-of anthologies. With Best Canadian Sports Writing, editors Stacey May Fowles and Pasha Malla offer a long overdue rejoinder from the North, showcasing top literary sports writing from diverse homegrown talent.

This extraordinary anthology of recent writing mixes columns and long-form journalism, profiles and reportage, new voices and well-known favourites such as Stephen Brunt, Rachel Giese, Eric Koreen, Morgan Campbell, and Cathal Kelly. The assembled pieces offer polished prose, unusual perspectives, and rare insight, whether it's Shireen Ahmed taking on Kobe Bryant, Anshuman Iddamsetty aspiring for sumo size, or Eva Holland tracing the rise and fall of ski ballet. With its many voices and approaches, Best Canadian Sports Writing expands the genre into more democratic and conversational territory, celebrating the perspectives of both fans and experts alike.

These remarkable pieces offer lasting insight that, like sport itself, excites, inspires, and never fails to reveal the truth about ourselves.

Stacey May Fowles is a writer and McGill Graduate in English Literature and Womenâ??s Studies who has worked in the literary and gallery communities of Montreal, Toronto and Vancouver. Her written work has been published in various digital and literary publications, including Fireweed, The Absinthe Literary Review, Kiss Machine, subTERRAIN, Lickety Split and Hive Magazine.Â  Her non-fiction piece Friction Burn appeared in the widely acclaimed anthology Nobody Passes: Rejecting the Rules of Gender and Conformity (ed. Matt Bernstein Sycamore, Seal Press.) She has work forthcoming in the anthology Transits: Stories from In-between (Invisible Publishing) and CahootsÂ magazine.Â She is a recent recipient of both the Toronto Arts Council, Ontario Arts Council and Canada Council for the Arts grants for works in progress and her first novel, Be Good, is forthcoming with Tightrope Books in fall 2007. She is currently working her second novel, every other love that is happening to you right now is not this big and Unconvincing, a collection of short stories.Â Â

“We live in one of the best sports nations in the world and our writers are just as great as our athletes. Best Canadian Sports Writing is proof of that — each story will have you hooked.” — Ken Reid, author and Sportsnet broadcaster

“As someone who has lived through the highs and lows of sports, I'm thrilled by this book. Finally, a book that isn't afraid to tackle the emotional, complex, and triumphant aspects of sports for fans of all stripes.” — Perdita Felicien, Olympian, World Champion, sports broadcaster

“It’s refreshing to see works by female writers and formerly taboo topics such as sexual assault and minority representation. The stories range from column length to epic, and they cover disparate sports, but all have great writing that holds the book together.” — Publishers Weekly

“Best Canadian Sports Writing isn’t really a book about sports at all. It’s a book about humanity, and a fine one at that.” — Waterloo Chronicle

“If Best Canadian Sports Writing is a true reflection of the state of Canadian sports writing, then our talent ranks among the best in the world . . . An anthology accessible to any reader, no matter their familiarity — or lack thereof — with sports and sports writing.” — Scene Magazine

Other titles by Stacey May Fowles

Whatever Gets You Through

by (author) Jen Sookfong Lee
edited by Stacey May Fowles

Loving the Game That Saved Me

by (author) Stacey May Fowles
illustrated by Marlena Zuber