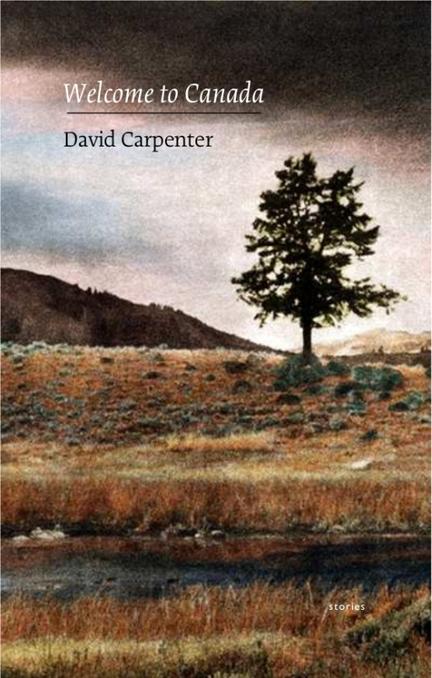 Get out of the house, get out of town, go west, go north, head for the wilderness and suffer like a true Canadian. David Carpenter will take you there. His prose has more pop than Orville Reddenbacker.

Understated and poignant, David Carpenter's Welcome to Canada: Stories collects a number of flawed and beautiful characters who illuminate the fragility of human nature. The isolation, unpredictability, and grace of the Canadian wilderness sets the atmosphere and tone for these brilliantly crafted short stories, while the characters, many of whom are city folks confronted with the life and inhabitants of the Canadian bush, discover the meaning of redemption in situations that challenge their beliefs.

The stories, a combination of short and long form, illustrate Carpenter's uncanny ear for humor and reflect how geography and culture are reflected in the dialects and cadences of speech. In the title story, 'Welcome to Canada,' Carpenter superbly depicts the phonetic quirks of an adventure-seeking Texan named Lester, whose interactions with the locals are infused with the folksy levity of a social misfit. By the end of the story, Lester's unlikely relationship with his local fishing guide reveals the wistful sensitivity that lies beneath Lester's humor. In 'The Ketzer,' the short, terse sentences of the Potts family are fraught with emotional nuance. The longest story in the collection, 'Luce,' introduces a diverse cast of characters, including tough kids, tippling housewives, and a giant fish named Adolph. Carpenter's finesse with human frailty is at its most compelling when he looks at the world through the eyes of a twelve-year-old boy during a summer vacation. The most harrowing story, 'Turkle,' renders the harsh Canadian winter a capable and unforgiving opponent to the story's main character, a tough and stubborn father of three young children.

Carpenter's characters seek acceptance and connection, no matter how different they may be from one another. In 'The Ketzer,' Flora, a young woman in a family of hunting men, strives in vain to be seen: 'While her brothers talked hunting at the far end of the table, Flora, getting drunk with unaccustomed speed, began to clamour for her father's attention. He would not even look her way. Then they began to refer to her in the third person and this she could never stand.'

Flora is a typical Carpenter character: someone who desires to be seen as one is, without apologies. This wish propels many of the characters' choices and underscores a thread of desperation that runs through the stories.

The omnipresent Canadian wilderness; the unexpected pairings of people from different social, cultural, and economic classes; and the eccentricity of characters make this collection a testament to Carpenter's skill.

Welcome to Canada: Stories will be a pleasure for short story aficionados and for those who respect the beauty and brutality of nature. Elegantly bound with exquisite paper and typesetting, this book is satisfying, profound, and entertaining.

'The latest book by Saskatoon author David Carpenter is a collection of novellas and short stories that succeeds on a number of levels. Welcome to Canada features a landscape that is richly imagined (or perhaps remembered); it is a place where people and nature play an equal role, with the weight of importance shifting smoothly back and forth between them.'

'Spare and often colloquial, Carpenter's writing invites comparisons with Ernest Hemingway and Thomas McGuane, but his voice is his own. Despite the fact that it is one of the less-travelled areas of our literary landscape, Carpenter Country is a place well worth visiting.'